The verbal conflict that is going on between North Korea and the rest of the world, has sparked a lot of debate across the developed world. Most people, including you, probably think that South Korea, alongside Japan and the UN are the good guys. But are they really? War is never simple, and apart from the movies, there is no clear-cut distinction between good and bad. Today I'm going to try to explain the vast differences between North and South Korea, and why both can be good and bad. 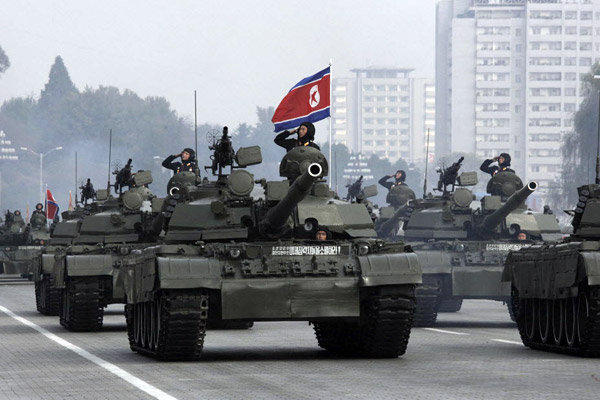 As you can see, in Seoul, and the rest of South Korea, people are just thinking of ways they can spend so they can feel some good emotions, while ignoring the poverty that is happening around them. In the North, the people know the value of money and frugality. 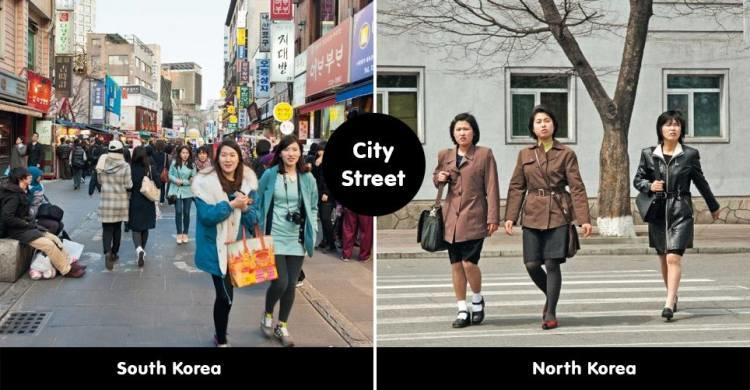 In South Korea, large corporations, known as "Chaebol's" have lifted the local economy to riches previously unheard of. Some of these companies include the well-known Hyundai, Samsung, and LG. The North, due to economics embargo's, has no such corporations. 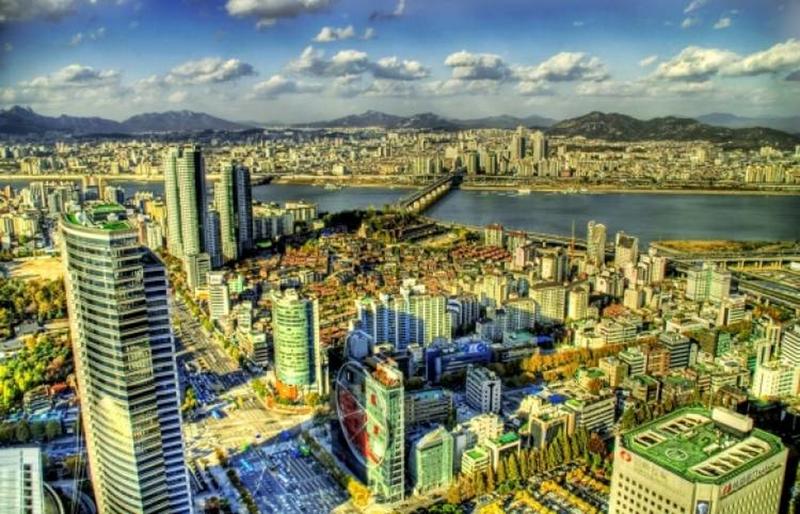 Devastation Brought on By the Sanctions

South Korea has a rising middle-class, and more and more people are moving into the suburbs, built around the wealthy cities, with developed service economies. The North is still battling food scarcity, and many people still live in rural farms. 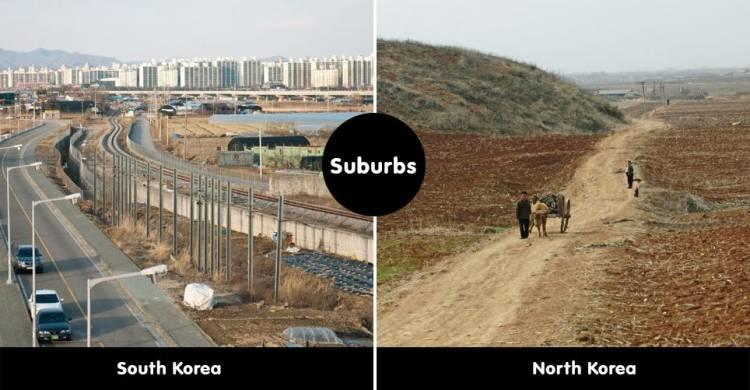 The picture above is a funny cartoon of the differences between these two Asian countries. While in the North, you go to a mine every day to get miners, in the South you have to play StarCraft II and battle the evil Zerg creatures.

In the North, if you get bored with routine life, you can join the military and do some epic drills, ride tanks, and launch missiles. In the South, you do what all the other normal people in the West do - you can to do a club and drink. 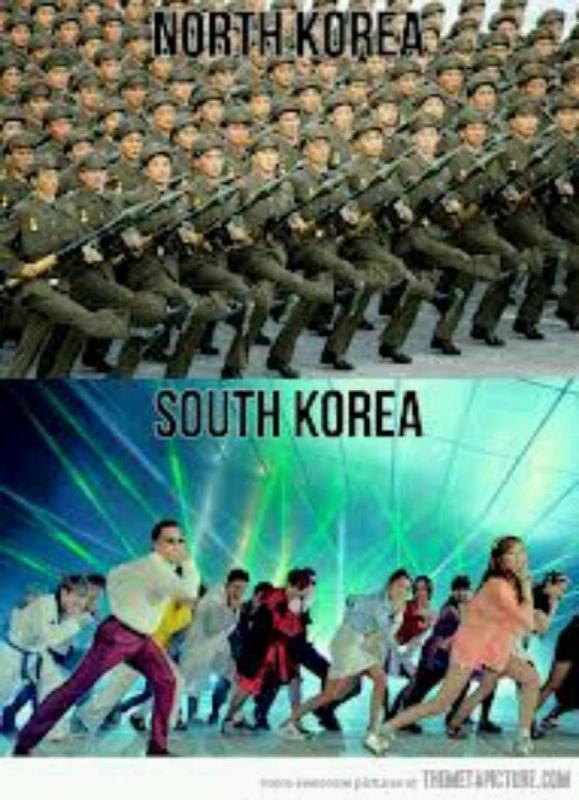 Even though I may be partially biased to the North (I always like betting on the underdogs), the South does win in the ladies department - even if they are the same people, ethnically speaking. Western skimpy clothing is always going to be sexier than Eastern skimpy clothes. 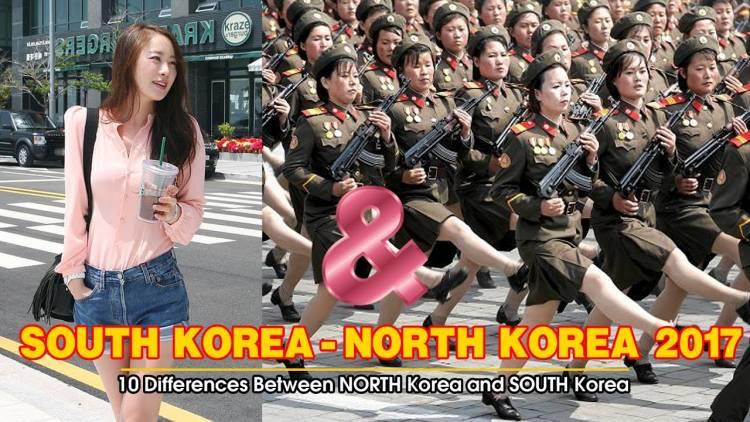 The South Has Better Internet Connectivity

South Korea has one of the fastest and most stable Internet connections in the world. The North is at war with half the world, so obviously they have to censor a lot of the content before letting the people read any anti-North propaganda. 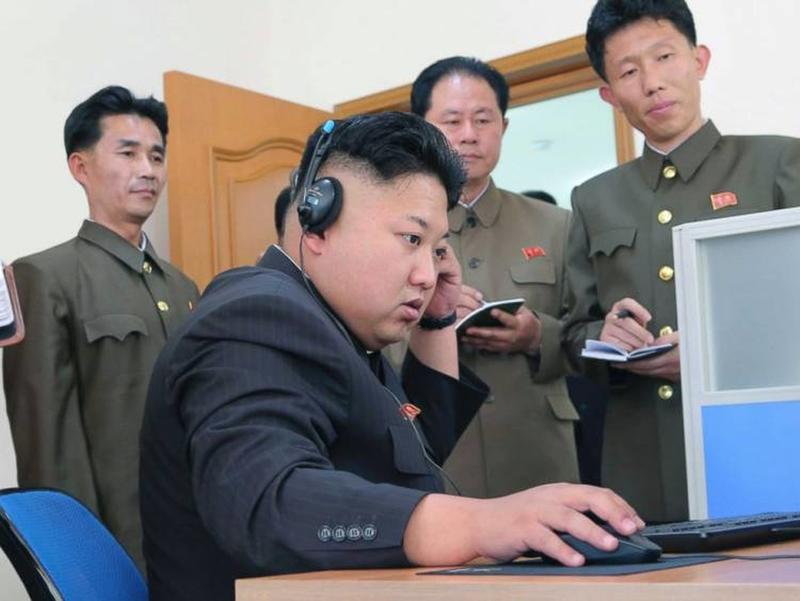 In North Korea, the average life expectancy is a miserly 72, while in the South people live an extra 12 years. That's not a small difference - in fact, South Korea has one of the best life expectancies in the whole world, even leading some European countries. 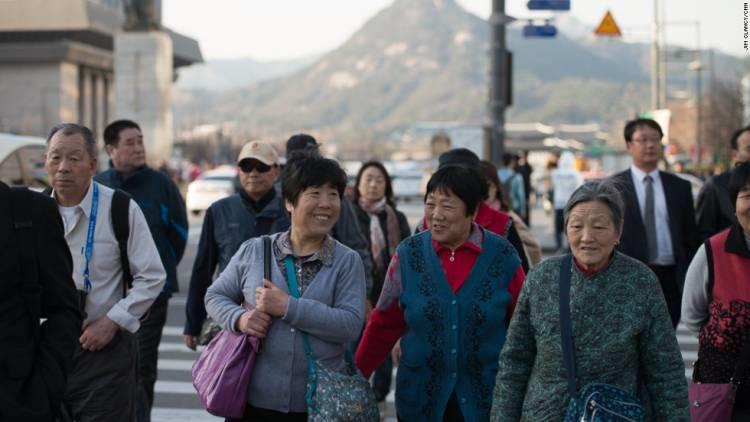 Everyone known over-population is a big problem in today's world. If the world had less population, we would be using less energy, releasing less CO2 particles, and need far less oil and coal. Someone forgot to tell this to the South Koreans. 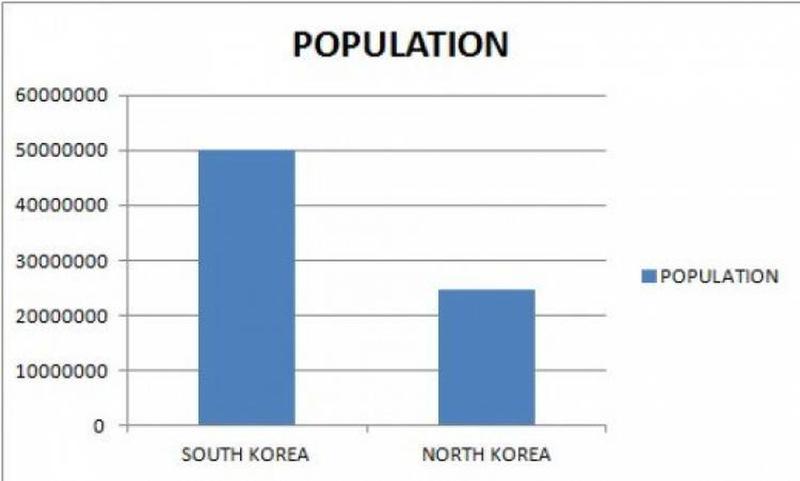 Despite many Western countries moving away from active military service, both Koreas still require their citizen to attend military service. While the South requires only 2 years, the North at least does this properly by requiring a decade of service from the male population. 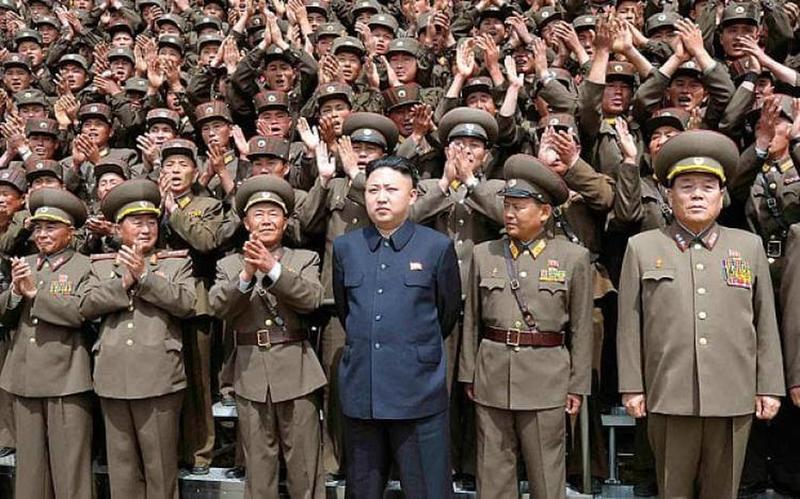 This is one area where the South does much better and spends its money more wisely. While South Korea spends a single digit of its GDP on military expenditures, North Korea spends a whopping 22%, and some say this figure is even larger. 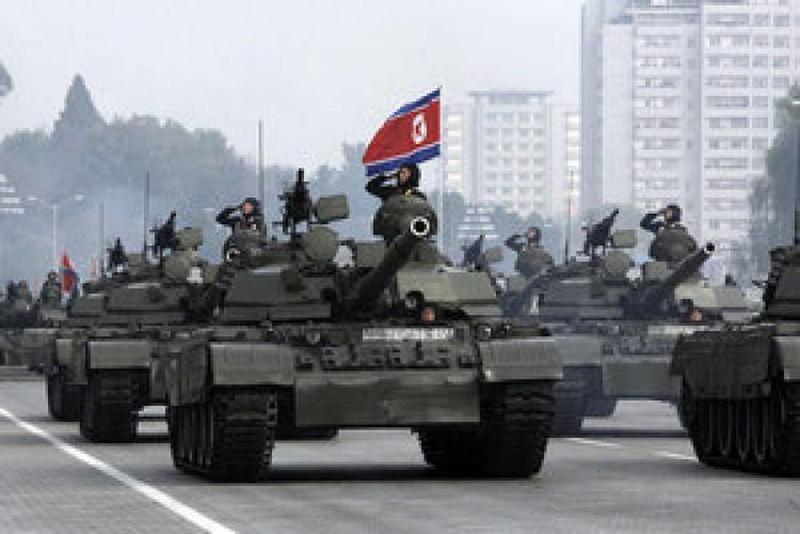 South Korean people are a whole 3 inches taller than their North Korean cousins, despite having the same genetic makeup. This is most visible in children, and probably due to malnutrition and health issues in North Korea. Genes are an amazing thing. 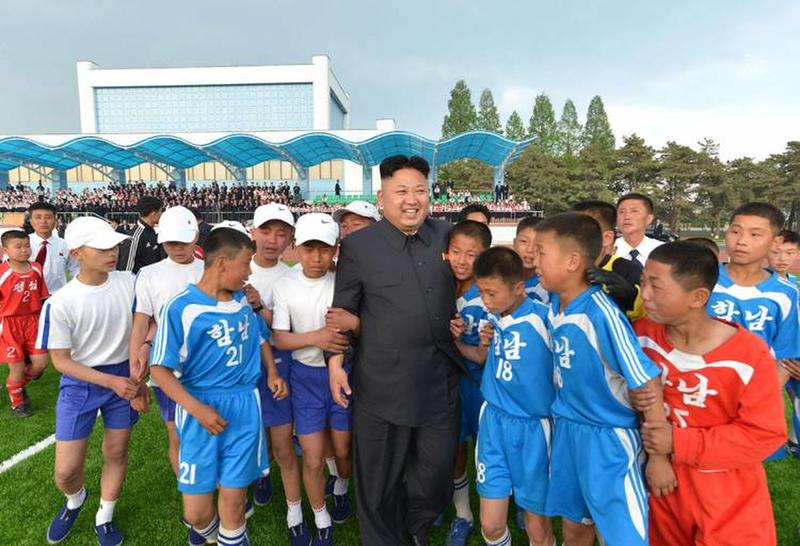 As you can see in the above photo taken by a NASA satellite (or the ISS), North Korea spends far less electricity at night, than South Korea. South Korea tries to light up all their streets, even if there are basically no people walking on the streets. 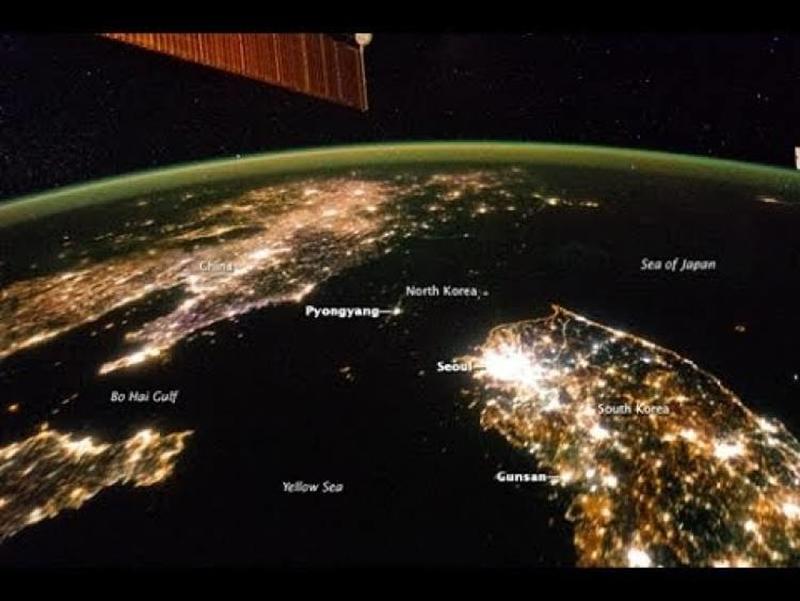 Many People Mistake the Two Koreas

Despite South Korea is one of our closest allies, many people mistake who are the good guys, and who are the bad guys. The above illustration serves to illustrate this purpose - remember if you have a Hyundai car, that came from SOUTH Korea, not North Korea.

There Are More People in Poverty in North Korea

As you might have extrapolated from the previous slides in this article, the North Korean people are in a far worse situation than their Southern cousins. A total of 40% of the North Korean population lives below the poverty line - that means 40% have barely enough money for food. 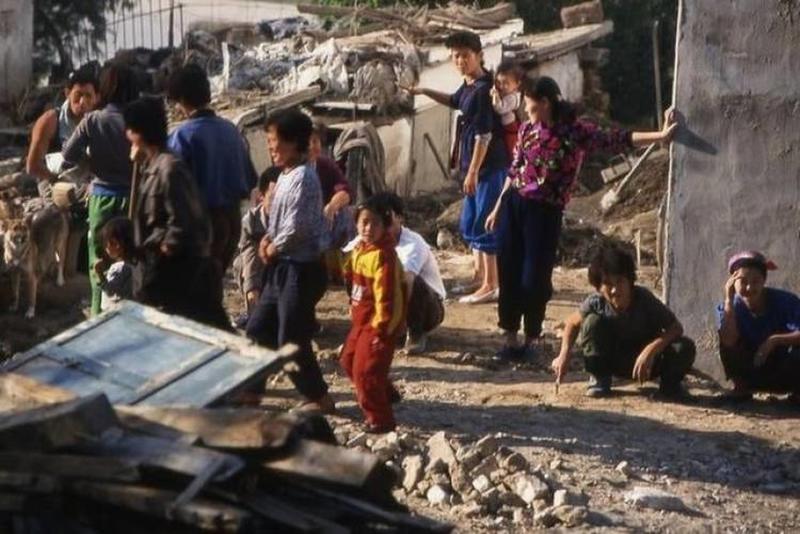