15 Secret Hiding Places That Will Fool Even the Smartest Burglar

Even though we've made it to the 21st generation, burglary still to this day happens rather frequently - obviously the government is to be blamed in most parts of the world presumably. However, the blame game never comes to an end so just ensuring that you, your family and your precious items are safe from the eyes of potential burglars is important.

Contrary to popular belief, expensive safes with complicated locks aren't the only way to burglar-proof your house. Instead, take up on strategic hiding places to get the job done. Here are some suggestions:

Who doesn't love a good ol' art piece hung on the walls, accentuating the beauty of their humble abode? Well, it's time you got even more creative! Cut out a hole in the wall that's as large as the painting or art piece you intend to hang, and use it as too store your precious items. 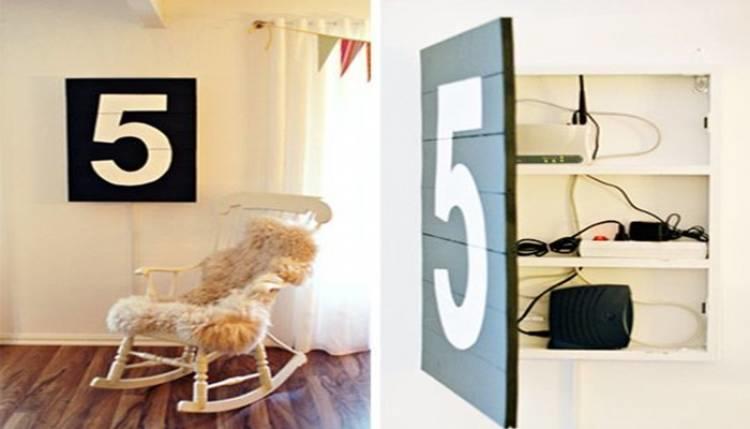 When a burglar breaks into your house, he's sure to look anywhere but here. Cut out a round at the top of your door, and place a metal tube in there. You can use this storage to store your precious items such as emergency cash, cheque, gold coins or jewelry, etc - basically, anything small. 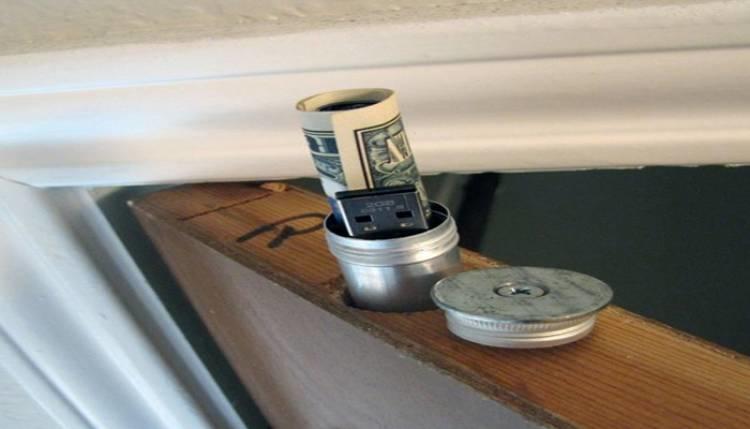 If you have a photo wall, or if you have been planning to create a photo wall, now is the perfect opportunity to do so. Install multiple medicine cabinets on your wall, and paste a printed out photo on the front. This way, you can keep your items inside without ever making it look obvious! 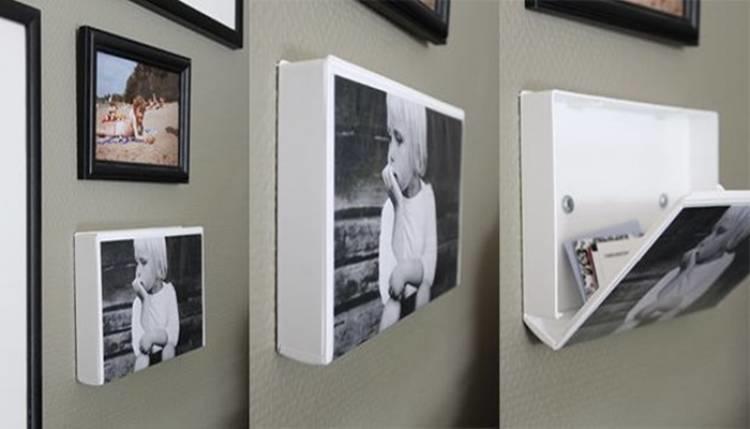 When a burglar breaks into your house, the last place they're going to search is your computer's keyboard. Well, this gives us the idea to create storage out of that so you won't ever lose your items, or have to worry about a burglar stealing your preciously stored items. 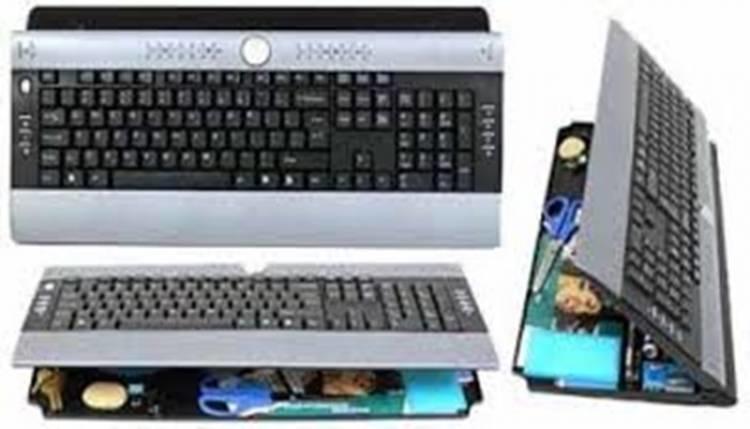 A sofa that can double as storage is truly one worth having - burglary or no burglary. This will give you the opportunity to save space by keeping either unwanted items here, or you can make use of the space by storing your precious items and ensuring that it is out of reach of burglars. 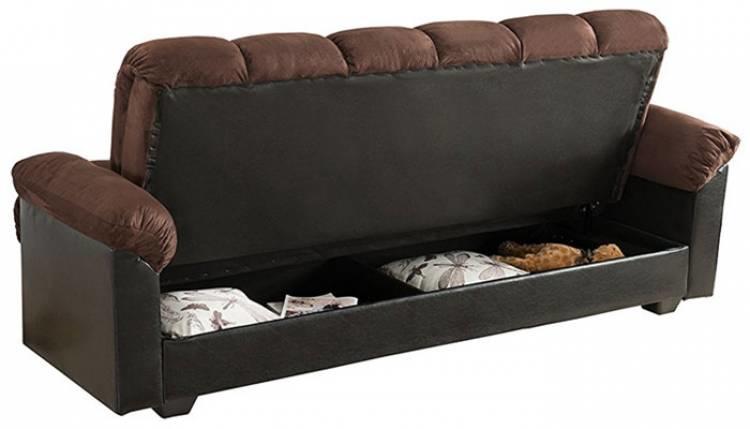 Back in the day, houses came with built-in storage spaces under the stairs. Nowadays, it's rare to come across that. If you're clever enough, you should make use of this excellent hidden stairway storage by using a step or the landing to construct a storage compartment. The space is also big enough for safes. 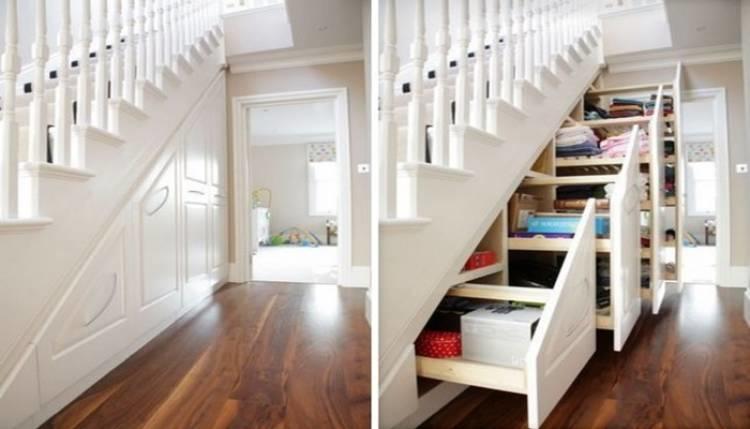 This is one of the best ways to store your precious items, as long as you are sure to remember which tile is your storage space. The trick is to take out a tile or two and create storage behind it, so that when you pull out the tile, something like a file cabinet comes out. Keep any item here because it's that secretive. 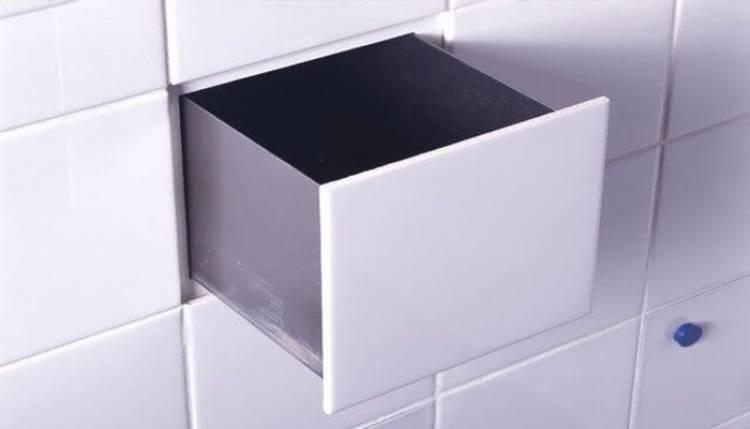 Similar to the aforementioned idea about creating storage spaces in bathrooms, you can do the same with your kitchen. These are two places that burglars are not likely to search thoroughly. They're always more invested in ripping the bedrooms apart. Store anything you like in there. 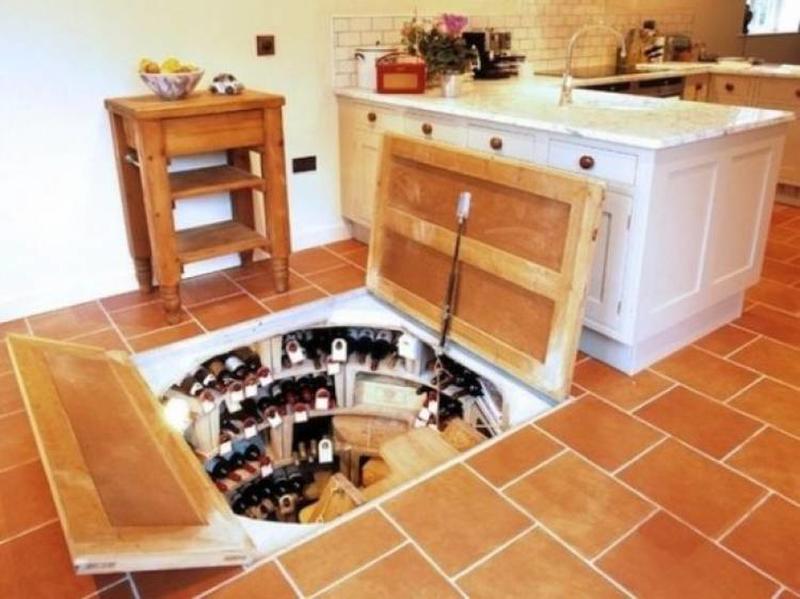 These cute yet cleverly designed wall outlets are perfect for the purpose of hiding things from the eyes of the burglar. They look like wall outlets with fake switches on them, but pull out like safes when you open it with the correct key. Burglars probably will have an idea about this, but it's worth it. 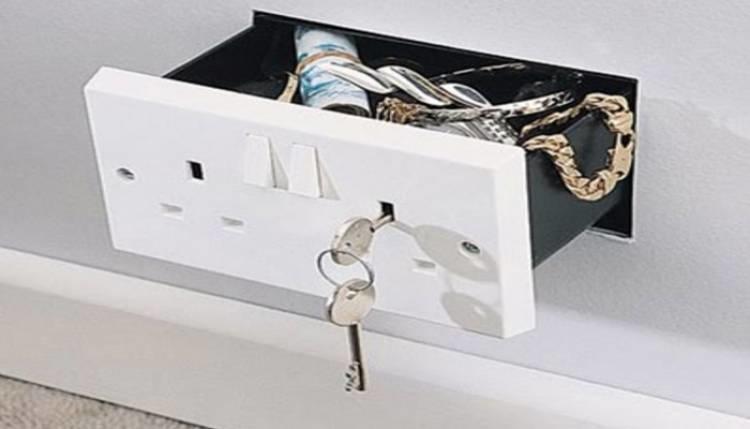 If you have a backyard, dig up a hollow space in the earth, and hide a little bottle in there. This bottle is your storage. You can keep anything from cash, to jewelry to anything that you can fit in the bottle of your choice, really. Just glue a rock on top and don't forget what it looks like. 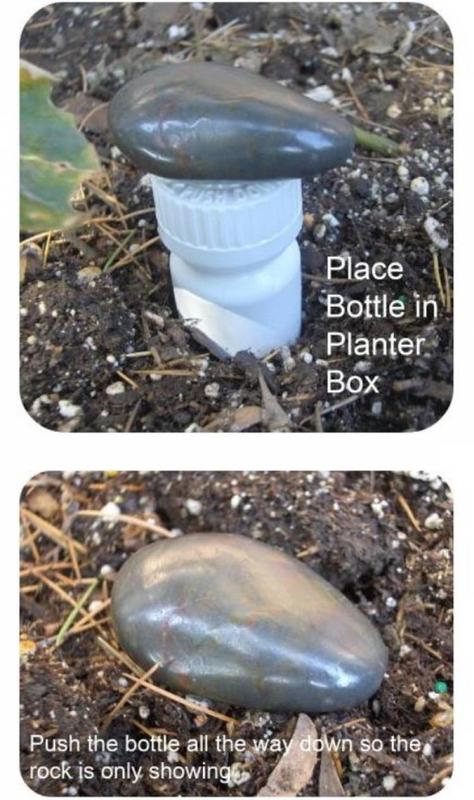 Many people have homes that feature encased bathtubs. This gives you access to modifying and making amends to the tub as you please. Use the encasement of the bathtub to create storage on the sides or under the bathtub and store your precious items there. No burglar would even think of this! 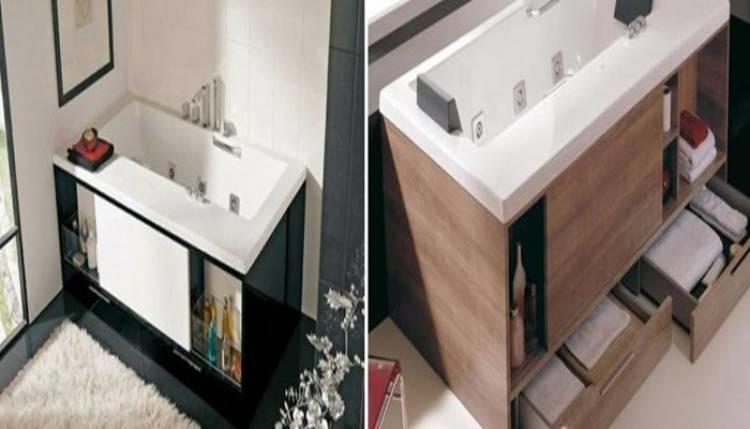 Floating shelves are relatively common in this day and age, and many furniture experts offer custom made floating shelves as well. Have someone make a floating shelf featuring a unique storage under it, so when it opens there's space for you to store your items in. 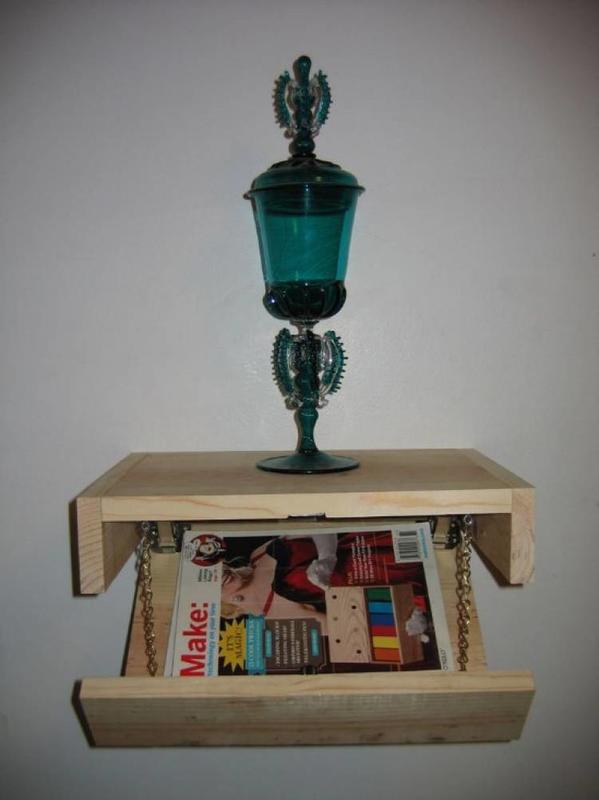 Rumor has it that there's an option to buy a mini safe that looks exactly like a lettuce from a distance. It has the capability of storing small items such as cash, jewelry, etc., and then you store it in your fridge. Unless you have a hungry burglar who wants to grab a snack in the midst of their burglary, they will never know. 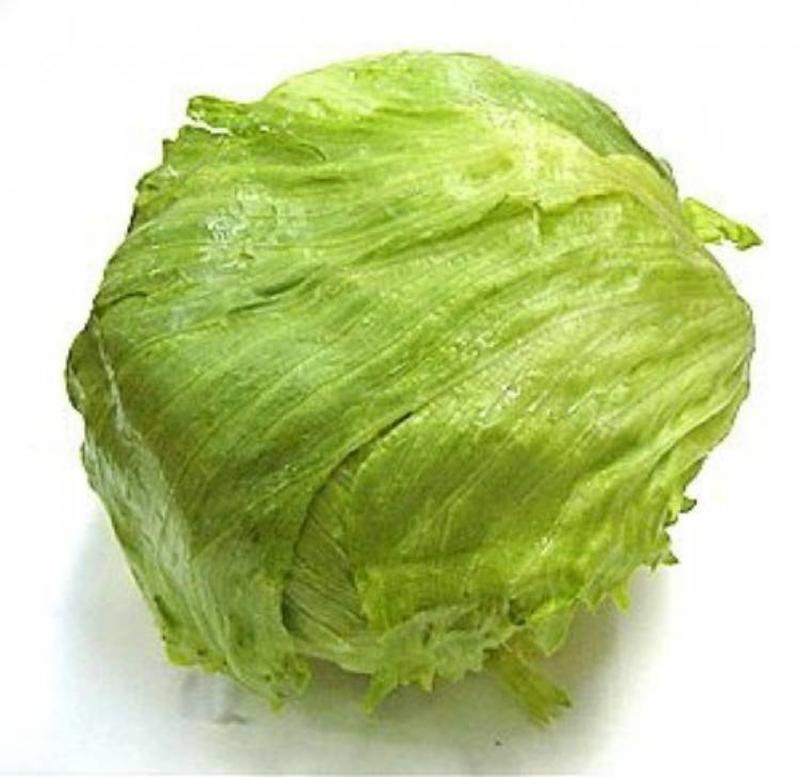 If you've ever watched one-too-many movies, and loved the idea of a bookcase that doubles as a door, now is your chance to make one. Except, you can't possibly create a whole other world behind it, but you can definitely create a storage space behind it. No will ever know. 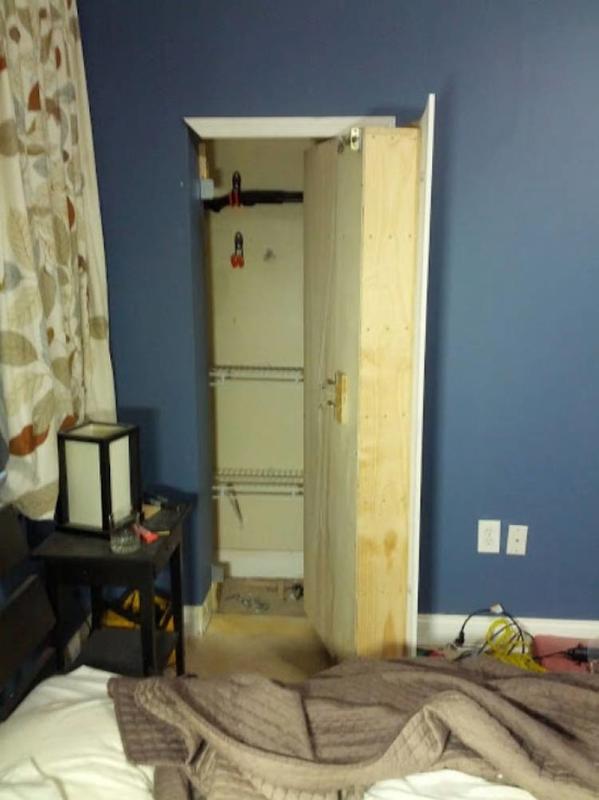 If you have some spare books lying around, just grab a book (remembering that it will be ruined), and cut a chunk of the pages out. This will be your secret storage for keeping money, jewelry or any other precious item that you can fit into this storage. 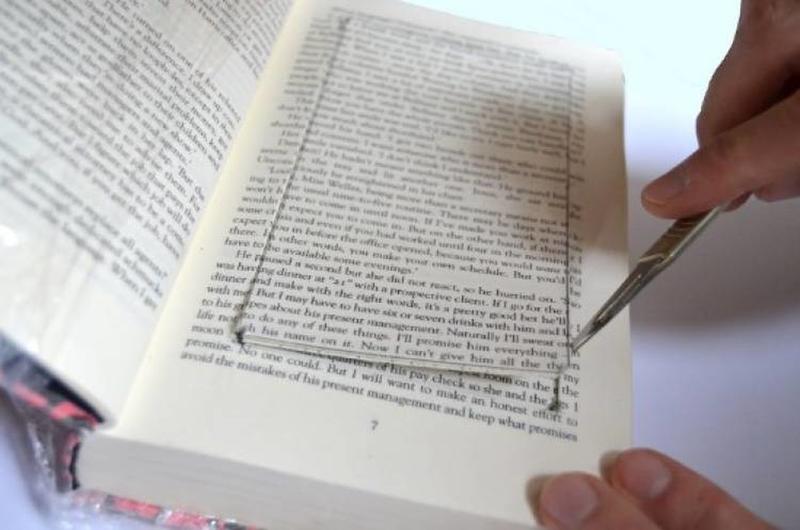