15 Hilarious Parenting Comics That Are Too Real

Parenting isn't an easy task, in fact it has been made to look easy by society, but there is a lot of hassle and trouble involved with raising kids. The end reward of seeing your kid succeed in life is worth the hard work you put in, but the early days as parents are often the most troublesome. Here we take a look at 15 comics that perfectly describe these days. 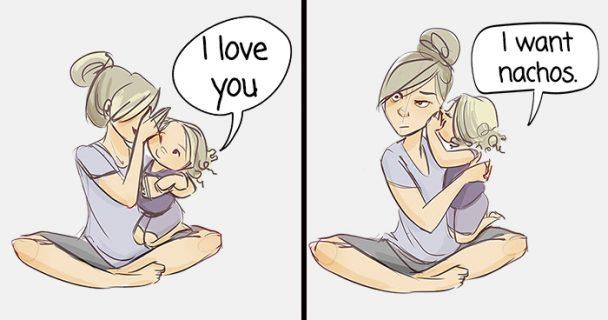 Parents always rant about how troublesome managing kids can be, but when it comes to motivating other parents into the club, they never bob down. It's almost like they're inviting people to the dreaded club of destruction they are in. 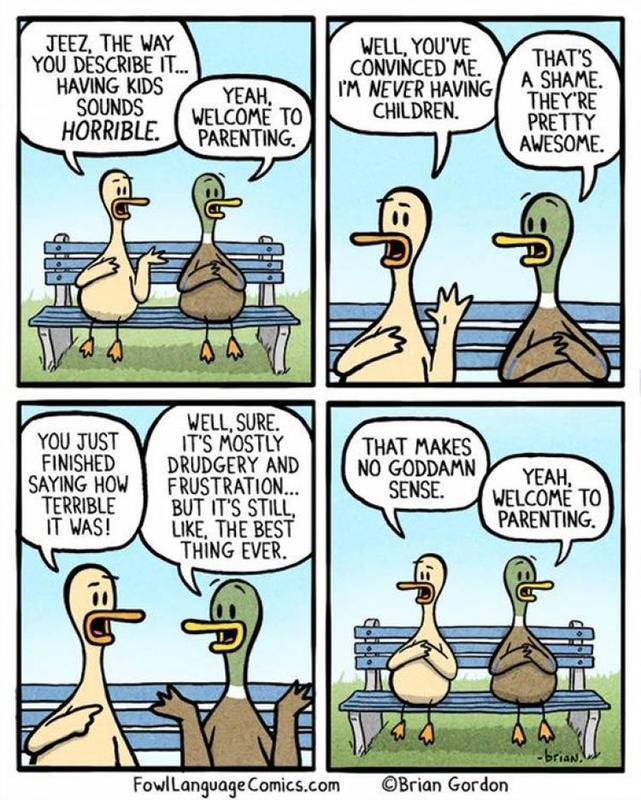 Kids at the dinner table can be really demanding. They want you to serve them specifically the dish they want in the way they want. But, when it comes to outside the dinner table, they can even put sand and rocks in their mouth. 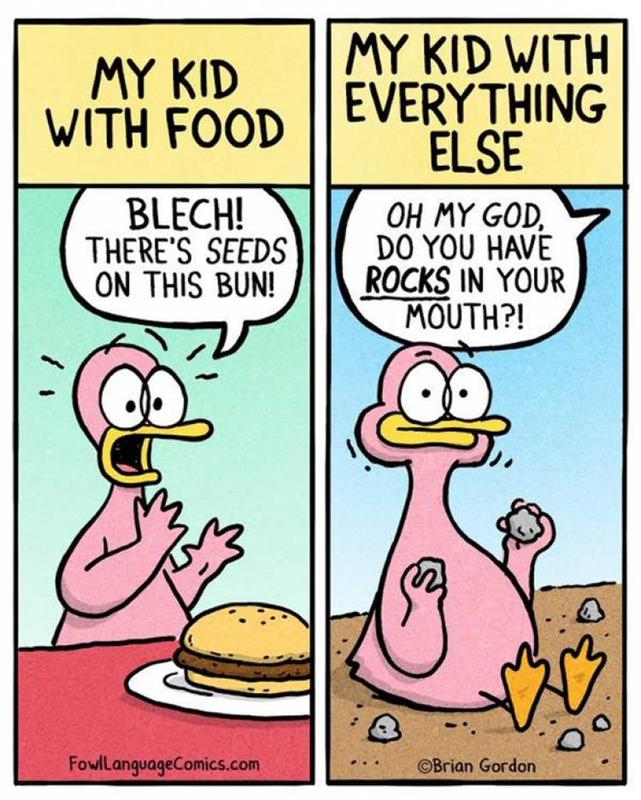 It is not when kids are noisy that the parents get worried, it is when they go quiet that they feel worried. Quiet kids can often be an indication of some trouble or that they are too busy hiding after wrecking damage somewhere. 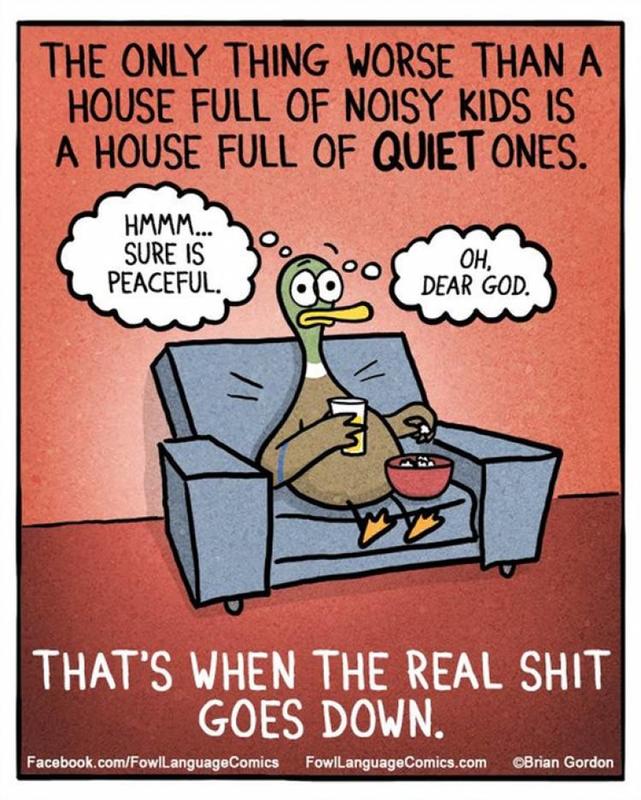 Parents Worried About Being Cool

Parents often worry about how cool they used to be back in the day, but haven't been able to maintain the momentum because they now have to look after kids. Now, all they have to do in life is to tell their children about toilet manners. 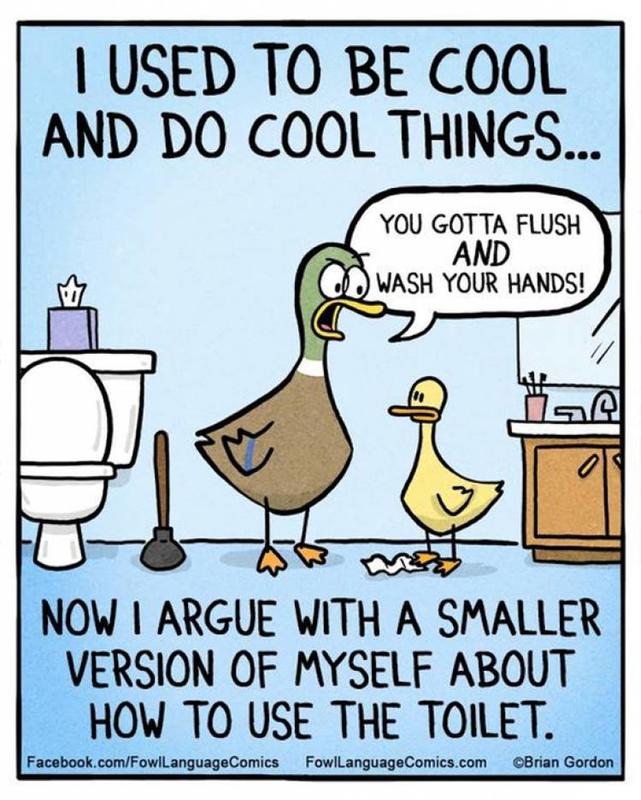 No Time for Themselves

The most worrying detail about being a parent is that parents have literally no time for themselves. They're so engrossed with looking after the kids that they get no time to watch a movie or hangout with the limited friends. 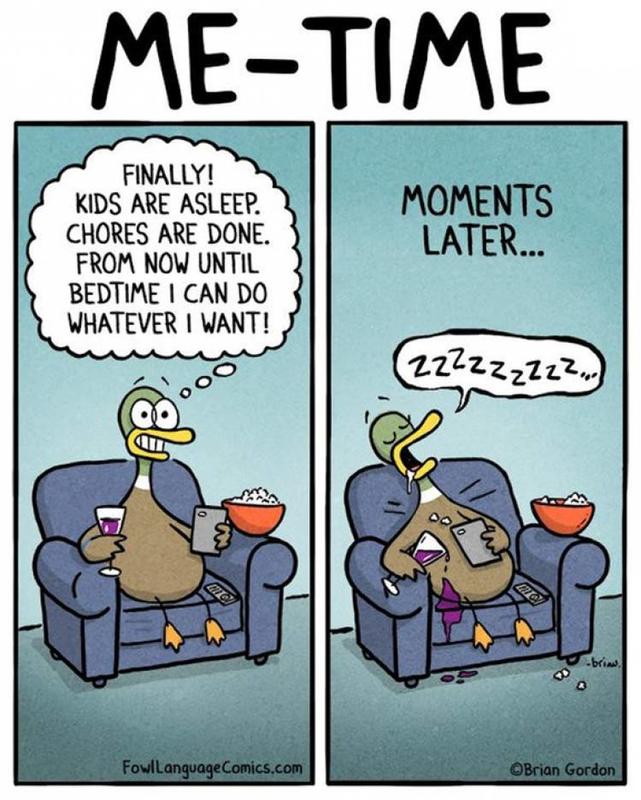 Dealing with children can often be a hassle, as it is demonstrated by this comic. Children are often the most shrewd when it comes to agreeing with stuff. Thus, when you tell them something, you often end proving yourself wrong. 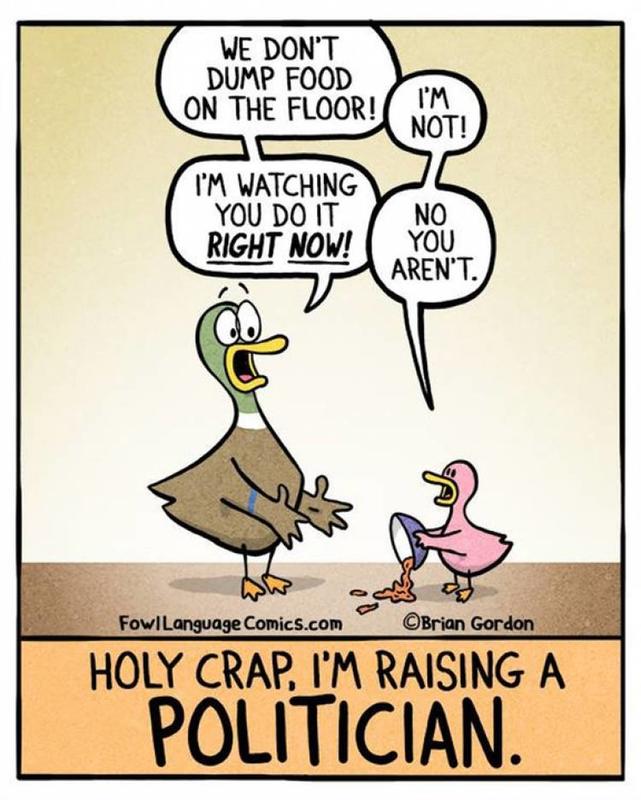 Kids might look like silent and cute beings, but believe us when I say that they conspire against parents at the back of the room. They have duties assigned and when they're both throwing a tantrum together, they have everything planned out. 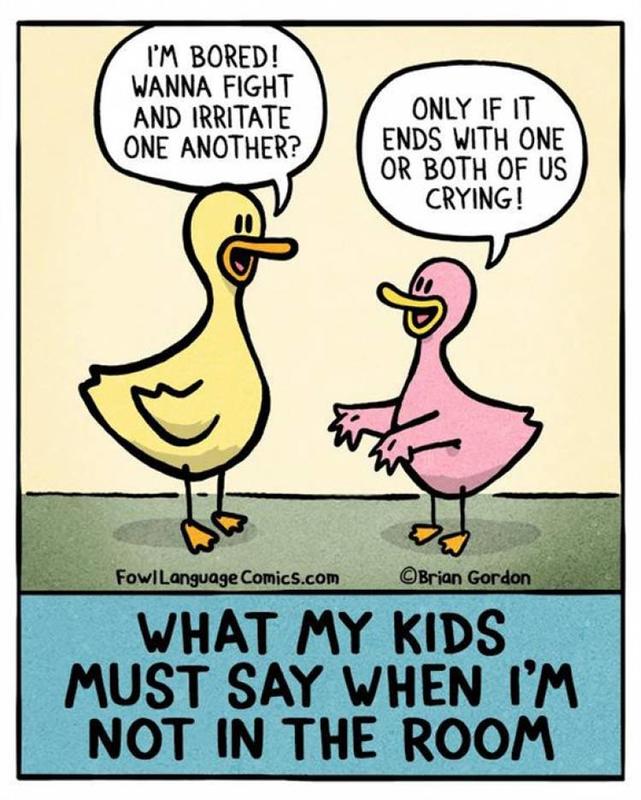 Parenting also means that you have to go through a lot of nights without sleep. Your children wouldn't want to be disturbed when they are sleeping, but they seldom hold themselves back from disturbing you when it's your turn to sleep. 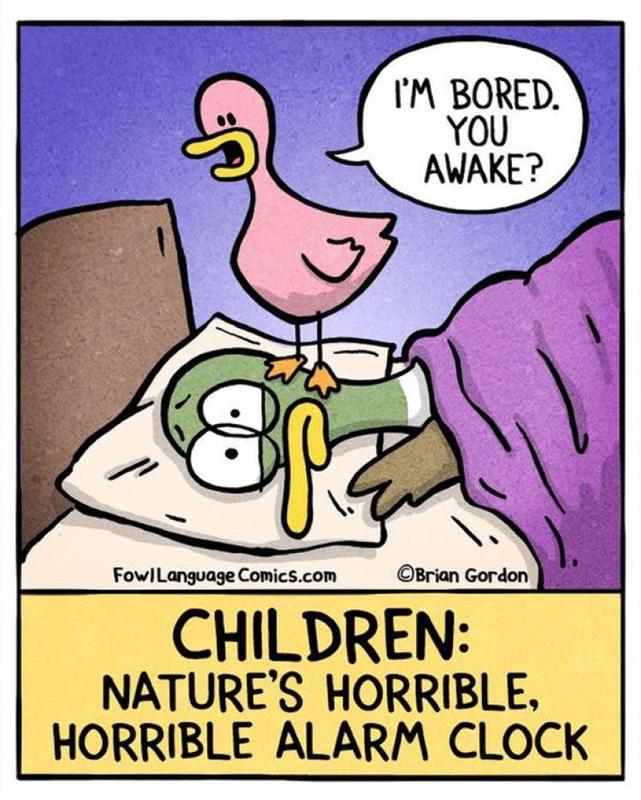 When it's your first kid, you don't have any idea of how to handle kids and take every tantrum seriously and look for reasons behind it. However, when it's your second kid you know they're going crazy because they're a nutjob. 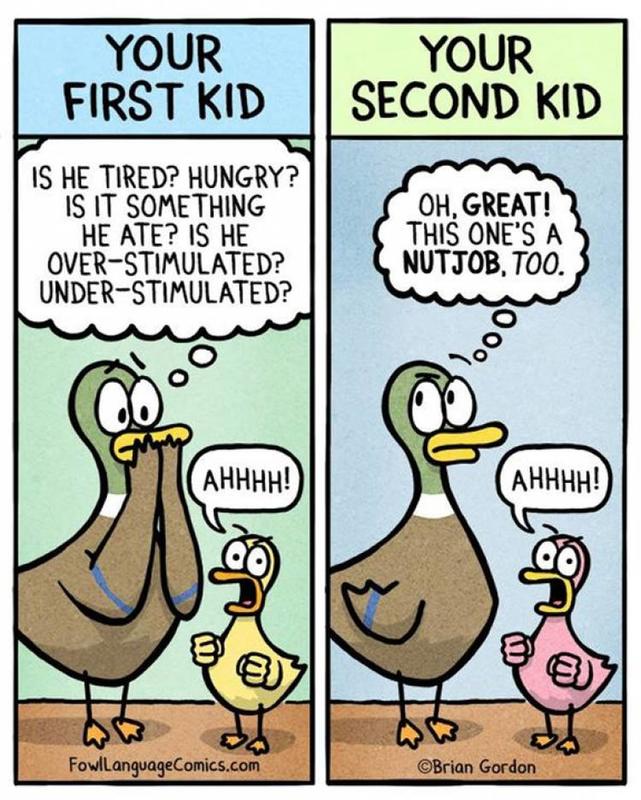 For much of their early childhood children have an obsession with pooping time to time. The number of times they poop is considerably high considering the food that they eat. They don't eat a lot, but still poop a lot. 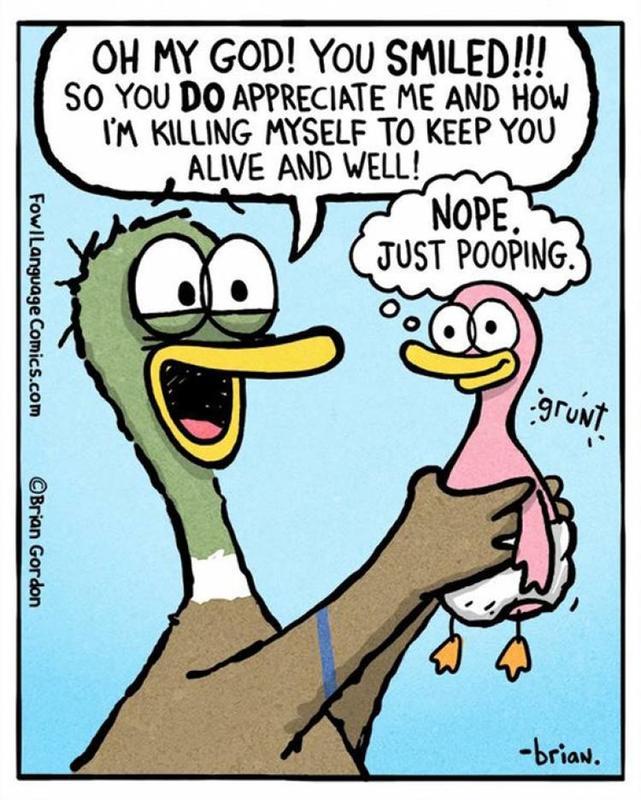 There is nothing better than scaring kids away when they are being naught. The best way to scare them away is to count till three and scare them. They'll develop such a fear for the number '3' that it will haunt them for life. 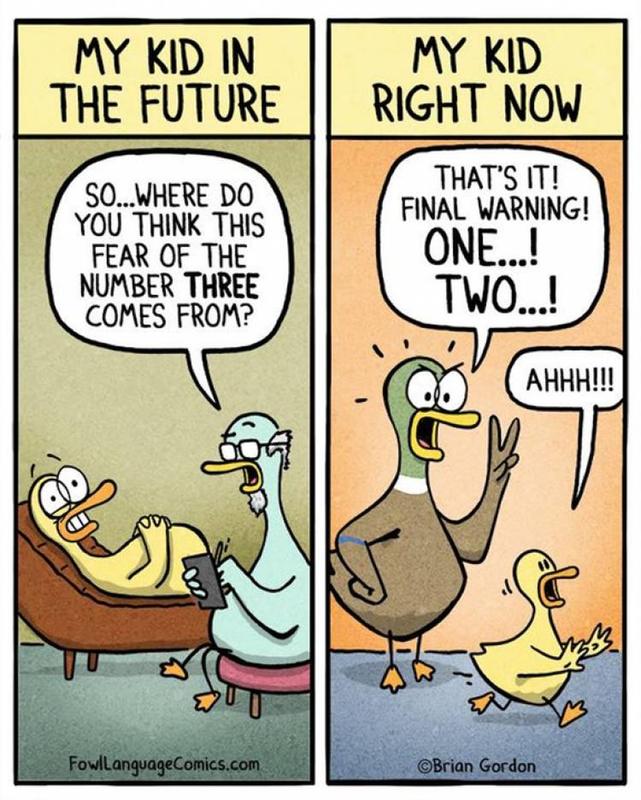 Kids have their own games and they want you to pretend that you're playing with them. Now, as a parent, it takes some doing to understand what is going on in your kid's mind and the game they're up to. 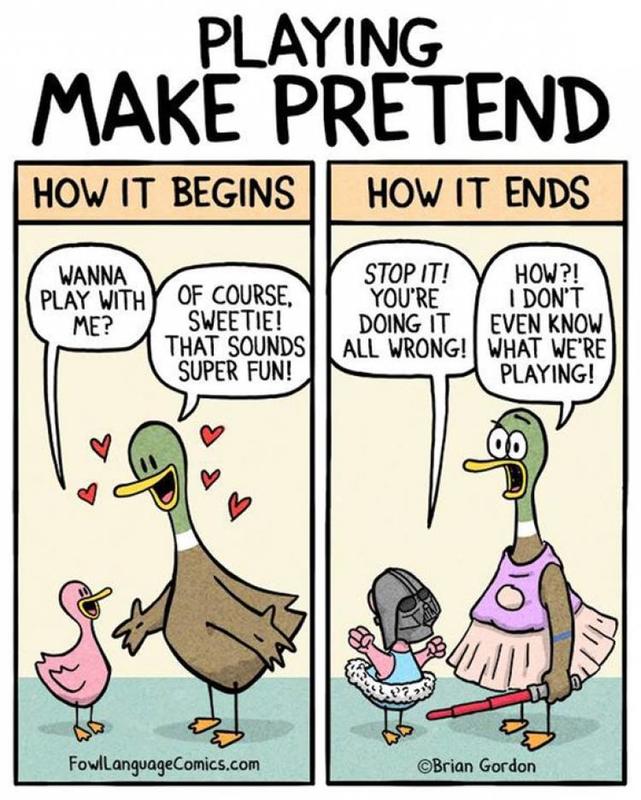 When your kid is small, you cannot stop yourself from taking them to the doctor for the slightest of problems. But, as they grow up, you realize that everything should not be blown out of proportion and end up missing on some serious conditions. 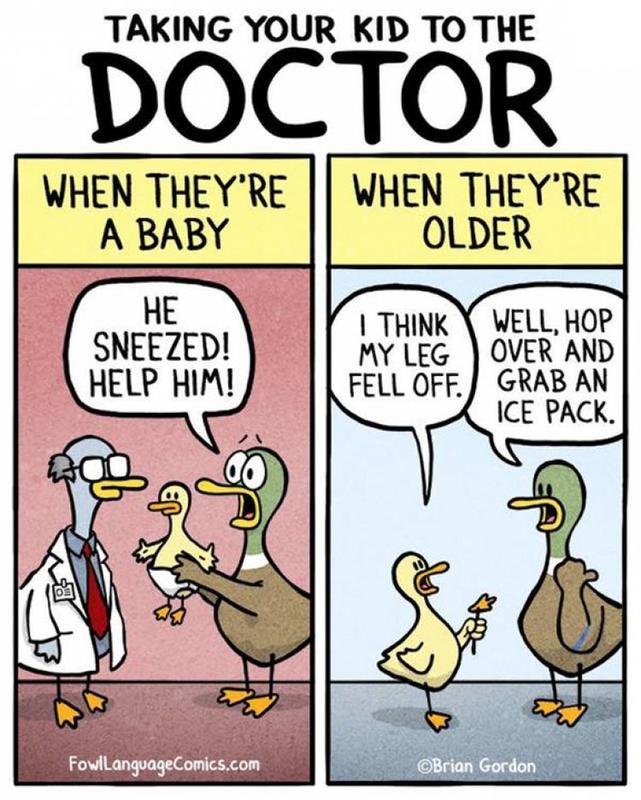 Parents cheering for their kids at games day is the best thing that you can see. Regardless of how much they want their kids to learn from losses, parents themselves want their kid to win and are willing to cheer for them. 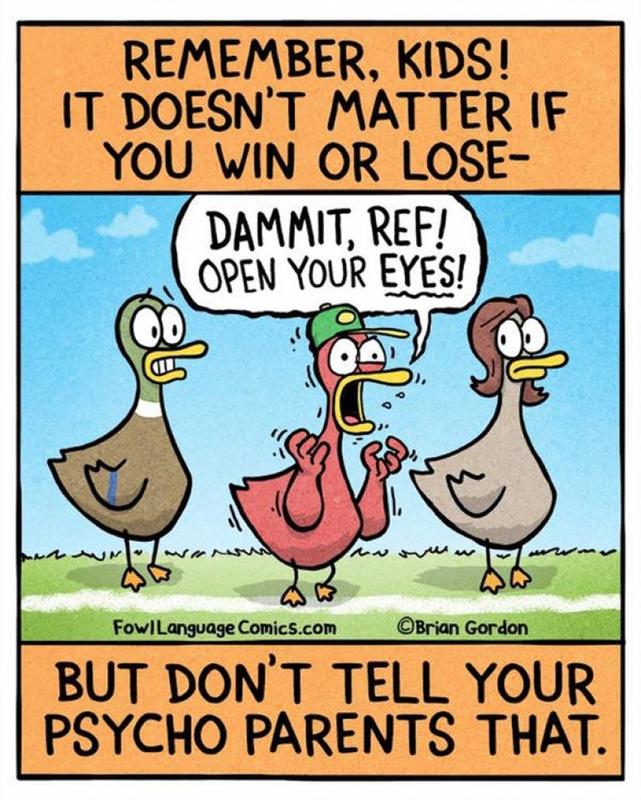 While onlookers might think that your kid is about to die, you know how dramatic they are and clear the air by mentioning the tantrum is because they can feel a tag in the shirt pricking against their skin. So dramatic! 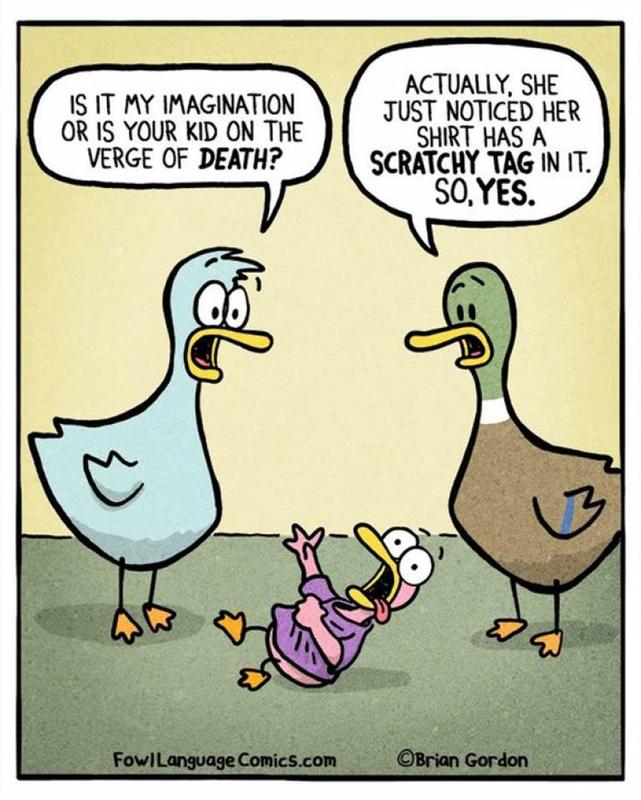 In the US, the average spent on an engagement ring is $6,351 but how do these figures compare with our favorite celebrities? The answer: they don't. As the diamonds increase in size, obviously the price tag appreciates handsomely. Well, we've compiled a list of some of the most expensive celebrity engagement rings.

This list would be nothing without Kim Kardashian's rock from Kanye, which clocked in at around a cool $4 million when he presented it to her at his stadium proposal in October 2013. Unfortunately, though, the 15-carat sparkler was among the jewelry stolen during Kim's infamous Paris robbery in 2016.

Jennifer Lopez's husband Alex Rodriguez popped the question to the singer, and he really had to step it up to outshine her previous engagement rings—and wow, did he deliver. The baseball star proposed with a reported 15-20 carat emerald cut stunner set on a platinum band that was estimated at $5 million. It's getting harder and harder not to be fooled by the rocks she's got...

It should come as no surprise that Beyonce herself totes one of the world's highest-valued diamonds. Weighing in at 24 carats, Jay reportedly paid around $5 million (now worth $6,047,013) for Bey's flashy emerald-cut ring back in 2008.

Anna Kournikova's relationship Latin music artist Enrique Iglesias since the early '00s has been one of the most lowkey celebrity relationships to date. That is with the exception of her $5,400,000 engagement ring that made headlines in 2004. Now, worth a whopping $7,443,596, the giant yellow stunner was spotted on Kournikova even during her tennis matches. (Pssst! It's rumored she got two rings from Iglesias. Prior to this, she sported an equally giant pink pear-shaped ring.)

Clocking in as the most expensive celebrity engagement ring, Mariah Carey's 35-carat bling from ex-fiancé James Packer reportedly cost a cool $10 million. And the "Obsessed" singer seemed to be a bit, well, obsessed with the jewel. She continued to wear the ring over a year post-breakup, and didn't part ways with the bauble until May 2018, selling it to a Los Angeles jeweler for $2.1 million.