15 Huge Mistakes In 'Titanic' That We Never Noticed

To this very day, Titanic is still one of the biggest, greatest, and impactful movies made. The film shaped the movie-going experience for an entire generation with its new-aged graphics, movie effects, and storytelling ability. You'd think it would be impossible to sit through a three-hour movie about a boat that sinks but, the way the movie was formatted it was compelling and kept us begging for more. Not to mention that the film was based on a true story. Well, despite how impactful and amazing the movie was, it also featured a plethora of mistakes that went right over our heads and now we're here to expose those mistakes. Without further ado, check out them out for yourself. 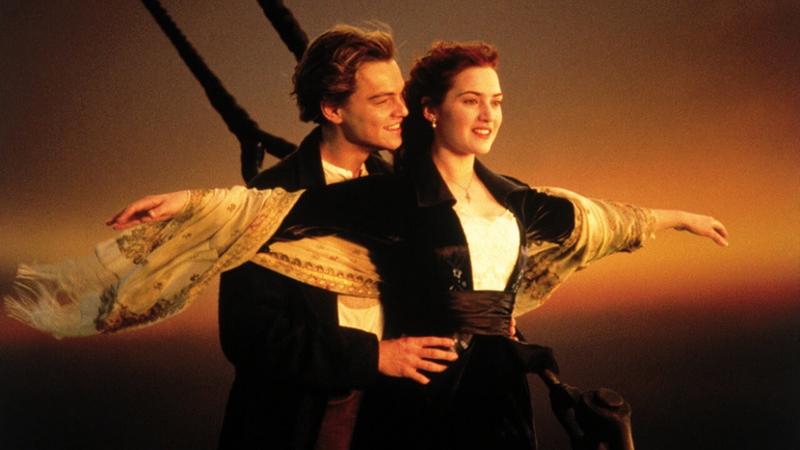 Honestly, we really don't understand how someone hasn't found a solution for camera/cameraman reflections in film. This is usually the easiest movie mistake to spot in any film and Titanic definitely wasn't the exception to this easily looked over mistake. 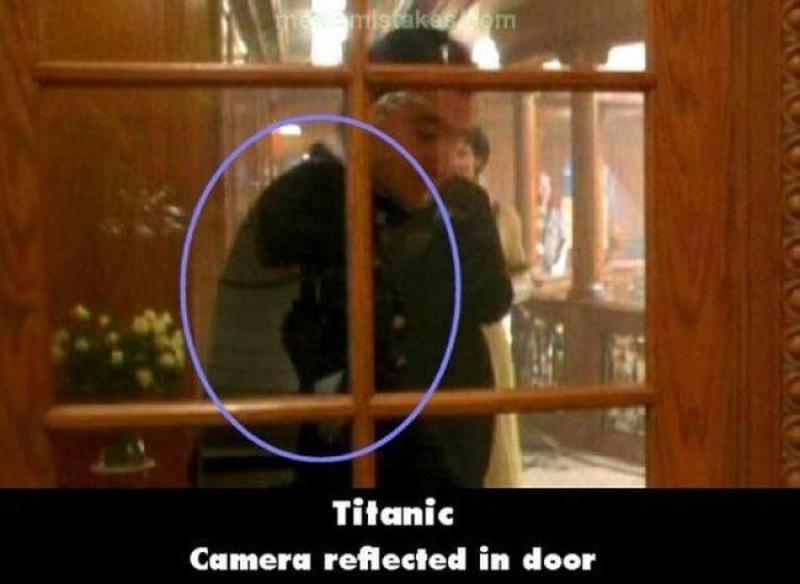 In one of the most crucial scenes in the entire movie when the front end of the ship was slowly sinking, a man was holding on for dear life to the front end of the boat and yet in the next couple of frames he appears in a lifejacket. Either he had magic powers or someone clearly wasn't paying attention to detail. 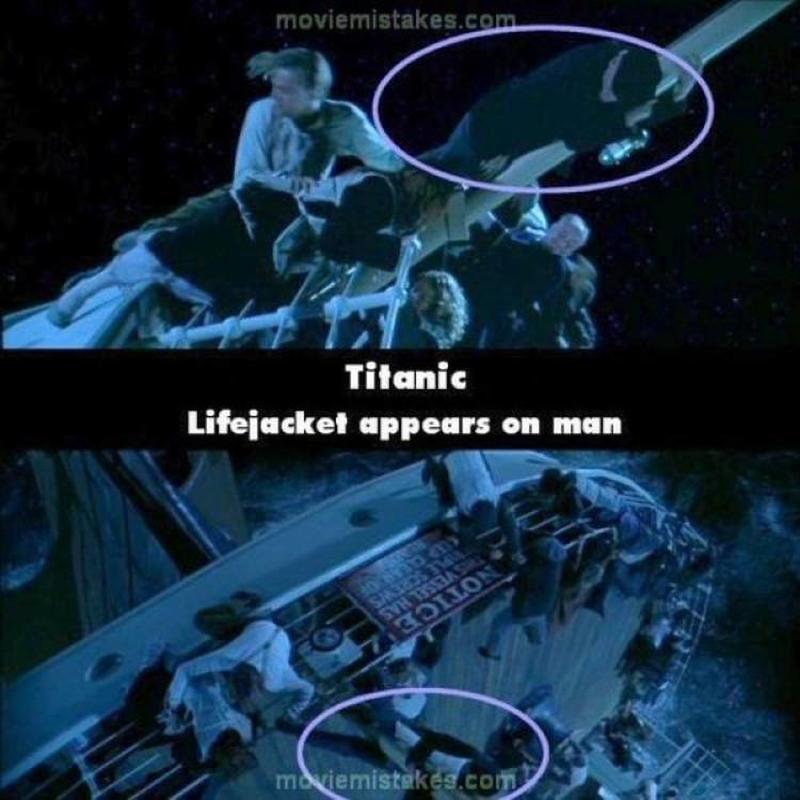 Personally, we wouldn't want our significant other swinging an ax anywhere near us but, desperate times call for desperate measures and Rose did what she had to do in order to free Jack. Except, in reality, Rose probably would have cut Jack's wrist with her wild swing resulting in a cut artery leaving him at the scene to bleed to death but then what kind of movie would that be? 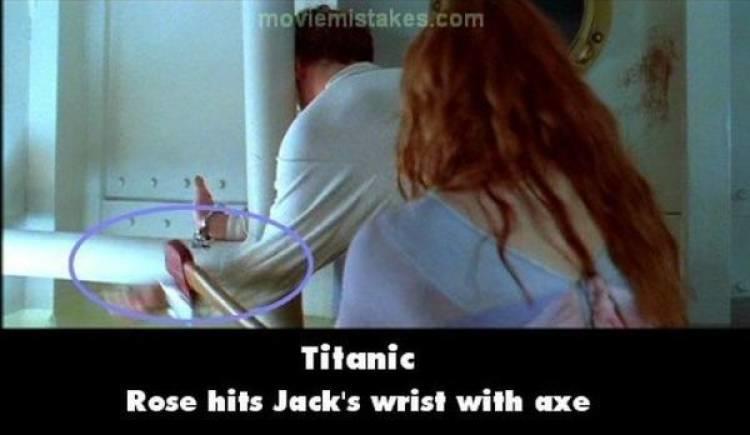 Today's large cruise ships and boats are very particular about the railing and protective barriers of their ships because they don't want anyone to end falling overboard which is probably why the working crew on the Titanic thought it might be a good idea to tighten up a few railing gaps while in the midst of their journey... Yeah, right. 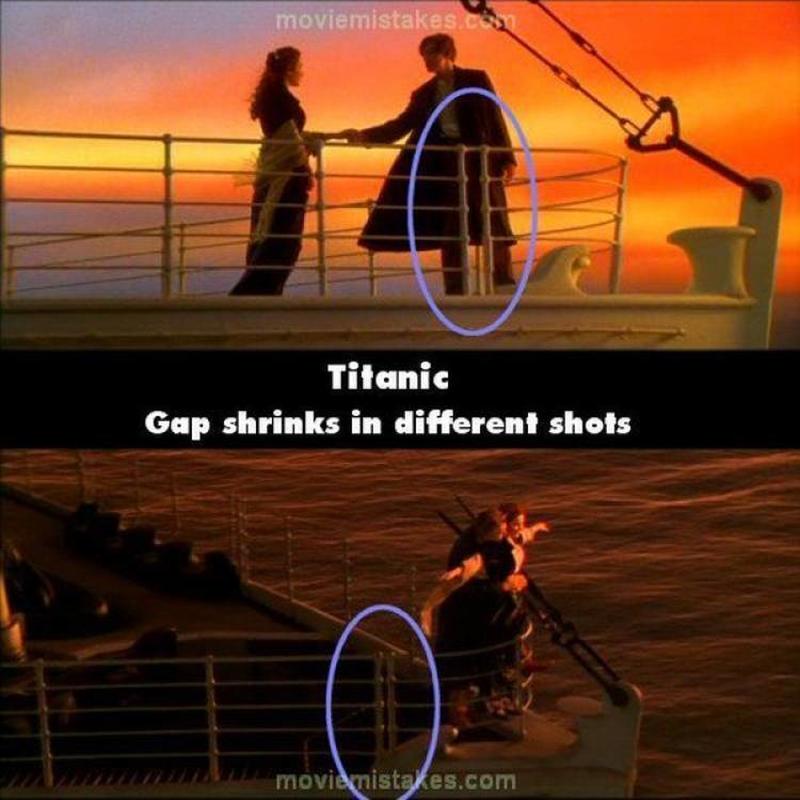 Maybe the prop crew hired for this film think people wouldn't notice the major changes in the ship's manufacturing but, little did they know that people live to find mistakes in major motion pictures. You'd think there would be more attention to detail on the ship itself being that the movie is about, you know... the ship sinking and all. 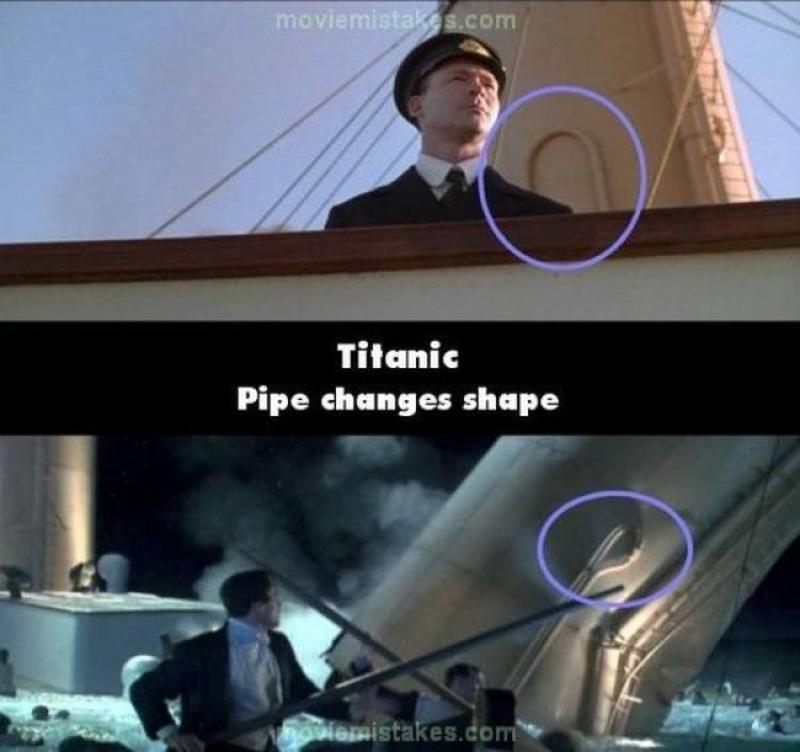 For those of us in the know about the basics of movie magic, we all know that wires are used to create some great visual effects but, at no point should the wires ever end up on screen like they did in this scene when passengers were falling into the lower deck. 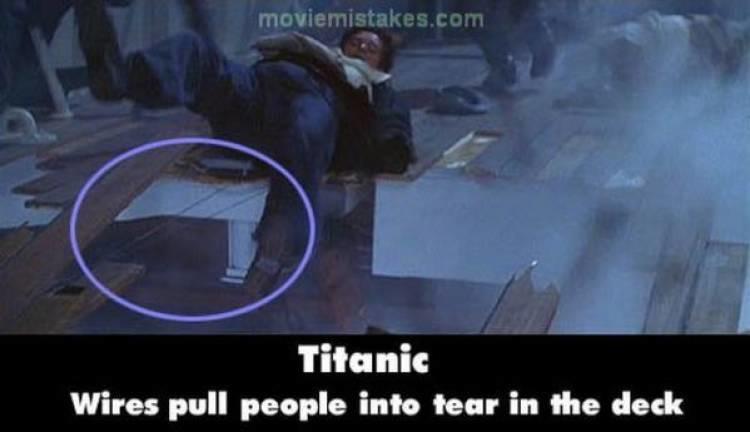 We've always wondered why people in makeup on the set of these huge productions don't keep a list or photos of particular details so, that mistakes like this don't get caught on camera like it did when young Rose's beauty mark switched sides on her face. 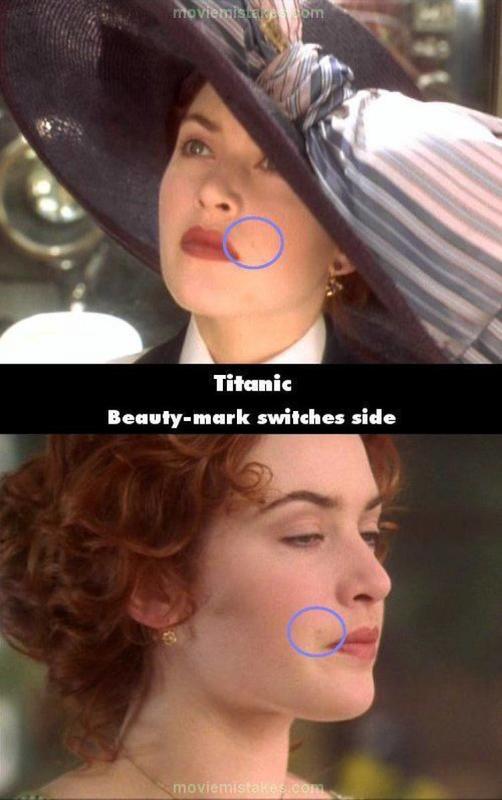 When Rose runs to go get the ax in order to save Jack, she breaks the glass rather well initially but, later more glass reappears as she's reaching to free the ax. This happened as a result of shooting a multitude of takes and pasting them together in post-production. 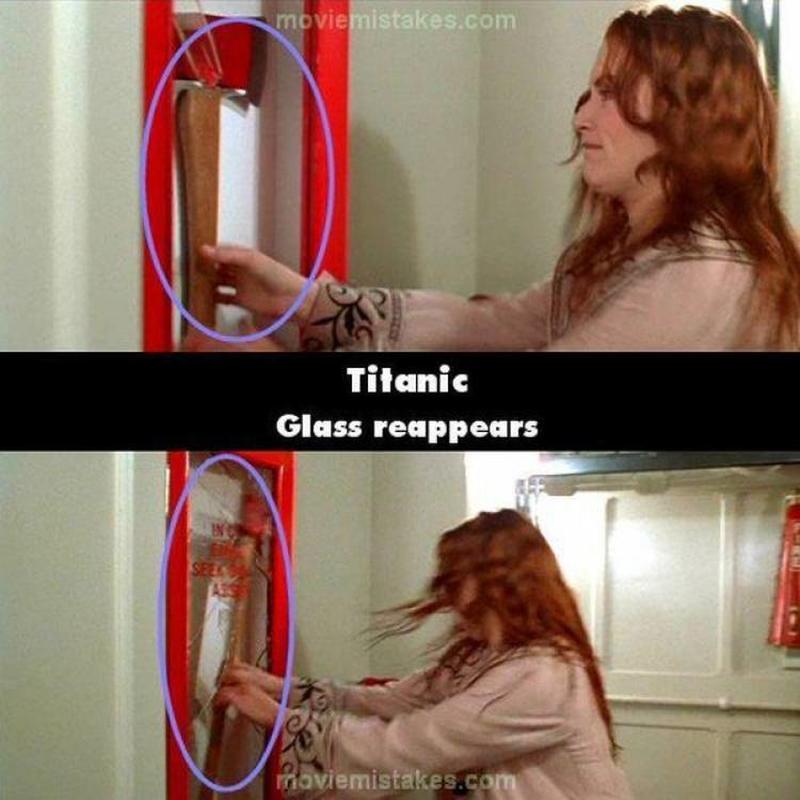 We don't know about you but, if we were on a large cruise ship and found out that some parts of the ship were made out of foam, we'd instantly call 911. Obviously, Titanic was just a movie but, they should have caught the wrinkles in the capstan in this scene and fixed it. 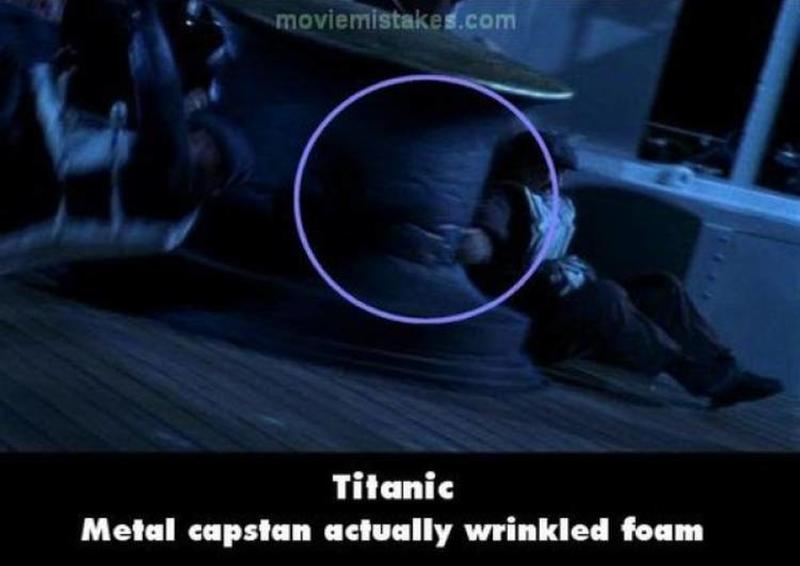 For some reason, moviemakers think that the extras in the background of a particular scene don't matter but, in reality, they really do. For instance, in this scene when Jack and Rose are having a conversation on the upper deck the gentlemen's coat's length and color changes as he walks past. 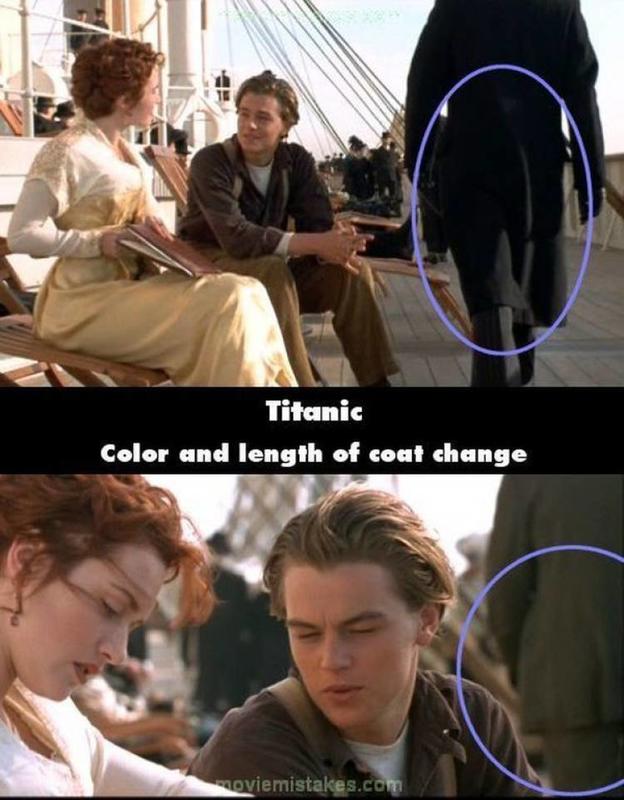 You'd think that the prop and scene crew would be very particular and on point during every take but, apparently, the crew had some sloppy moments as the water began to fill the ship and a pillow appeared on the bed in the background before Jack could fully turnaround. 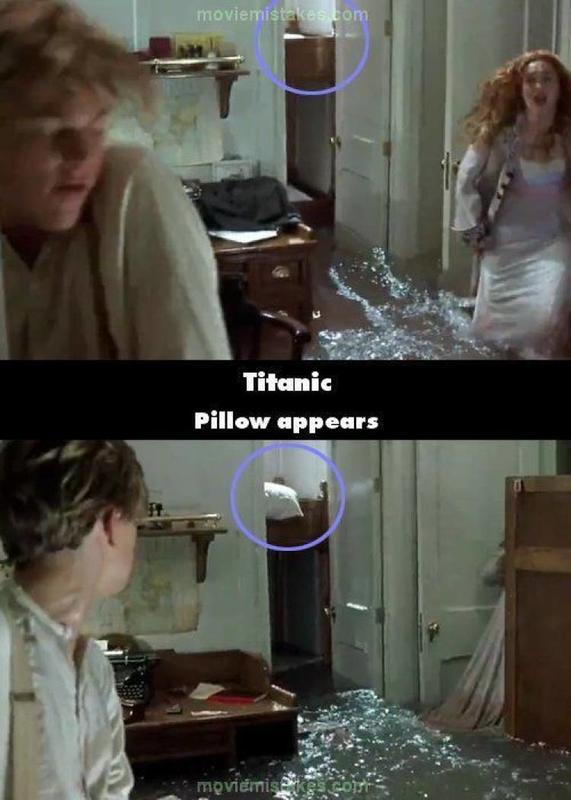 In what might be one of the most suspenseful scenes in the movie as the ship breaks in half, the graphics team thought it would be a good idea to leave out some key details on the frontend of the boat as it slowly sunk. That's kind of lazy if you ask us. 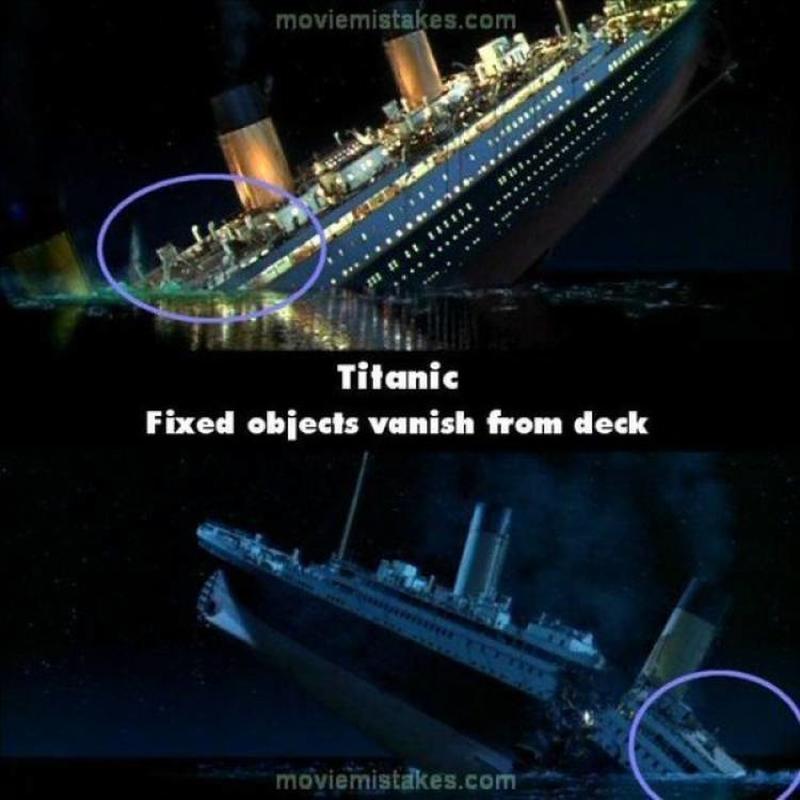 Whoever caught this movie mistake has some of the best eyes in existence and is detail-oriented AF. We're not exactly sure how this happened but the shadow cast made that person's hat a lot larger than the actual hat itself. 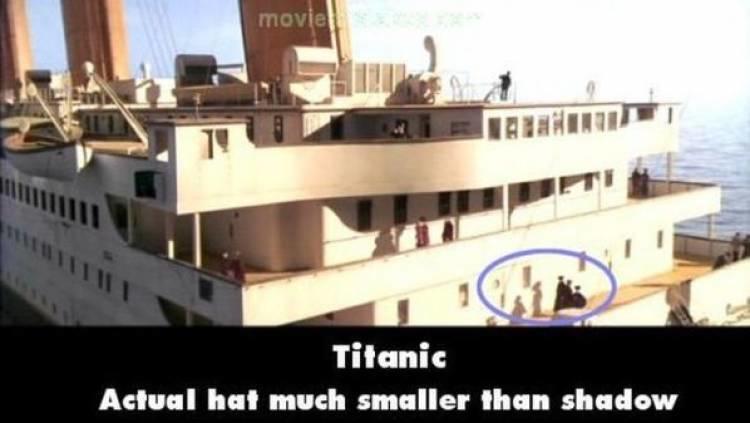 Material Gripped Or Not

First and foremost, we'd like to acknowledge that Rose was a dumbass for standing on the outside of the railing on a humongous ship that wouldn't notice her if she fell or not also, in different parts of the scene she can be seen gripping material of her dress along with the rail as well as without it. 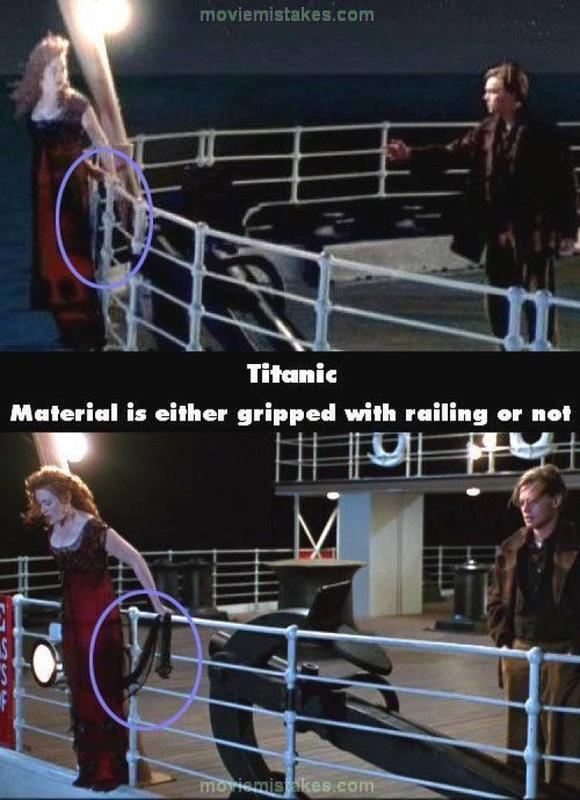 Wardrobe should always be on point especially when it comes to films that have budgets the size of Titanic's but, apparently, that too was flubbed during the making of the film as Jack's suspenders disappear mid-scene. 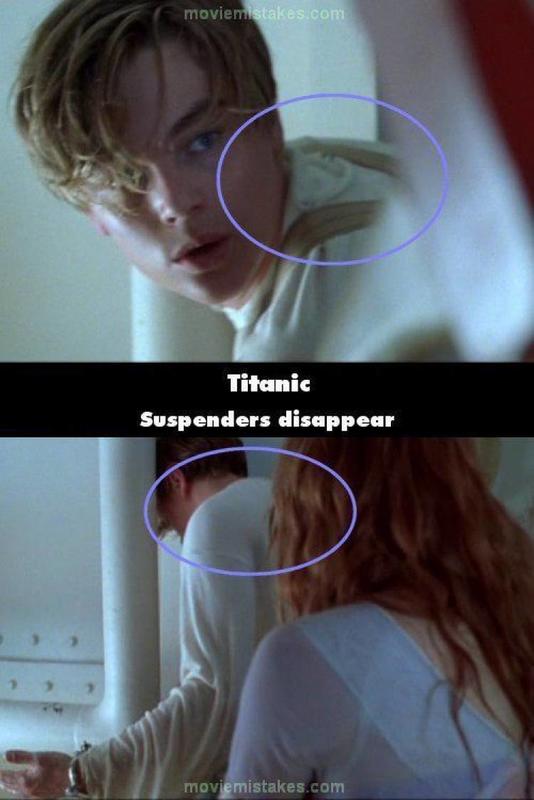