Deadpool Gets Rejection Letter From The Avengers Team

By now, Ryan Reynolds has made the fictional character of Deadpool quite recognizable to the popular culture fans of the world. Deadpool i.e. Wade Wilson is a figure that is featured in comic books published by Marvel Comics and the character's first appearance dates back to February 1991. Deadpool's powers include the superhuman ability of an accelerated healing factor but he's also well-known for his weird personality traits and breaking the 4th wall. 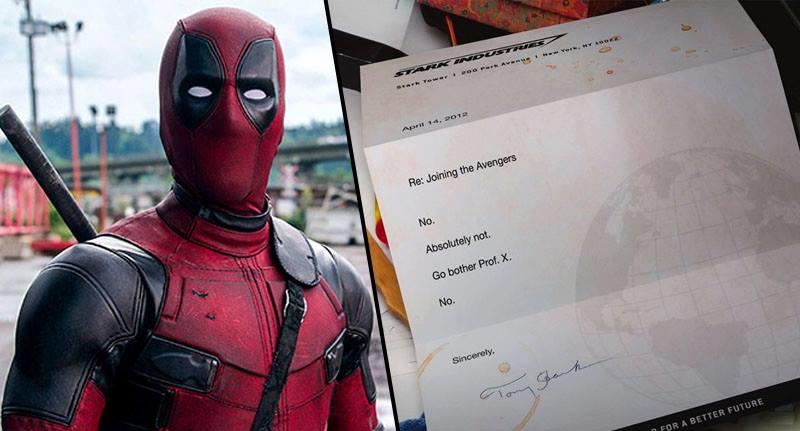 Considering the marketing budget for the movie, Ryan Reynolds proposed that the studio takes it to the Internet in order to promote Deadpool more efficiently. The actor even took one of the character costumes for himself and he played a huge role in the marketing campaign. This included a lot of funny video clips be it parodies of other people and events or just random sketches. For example, in one video Deadpool talks to a group of children masked as X-Men characters.

In similar fashion, Ryan Reynolds is using multiple opportunities to promote the second Deadpool movie which is set to be released in May 2018. The initial premiere date is May 16 for the cinemas in Nigeria, Russia, and the United Kingdom. This definitely ties in with Marvel's biggest movie to date which is, of course, Avengers: Infinity War that had its premiere back on April 23, 2018, in Los Angeles.

What Ryan Reynolds did is post a picture on Twitter of what appears to be a rejection letter from the Avengers in response to Deadpool's application to join their team. The rejection letter states: "Re: Joining the Avengers - No. Absolutely not. Go bother Prof. X. No. Sincerely, Tony Stark." Reynolds' tweet accompanying the picture read: "From a guy how never knows when to quit, I'm glad you guys never did. Congrats #Avengers."

Avengers: Infinity War couldn't go without a Stan Lee cameo and this is what the movie's co-director, Joe Russo, had to say about it: "So, Stan, typically we try to get him out - he doesn't love to fly - so we try to get him out for his cameos around the same time." Stan Lee is, of course, the co-creator of the most popular comic book characters such as Spider-Man, the Hulk, Black Panther and others.

In continuation, Russo added: "So if we have other movies shooting on the same lot that we're on, for instance, Ant-Man 2 or Avengers 4, we group his cameos together and then move him from one set to the next and kind of get him through his cameos in one day". Avengers: Infinity War has been met with an extremely positive response from both critics and the fans, and it has also made more money than the previous seven Marvel movies combined.