Often when we think about debilitating illnesses, such as cerebral palsy, we're not sure how to help. There are foundations that search for cures, or ways to volunteer to be helpers, but for most people, it seems like there's no impactful way to help. The issue seems far too big for any one person to solve.

That's simply not true though. All it takes are simple acts of kindness to improve the lives of those around us, especially people who have a debilitating illness. Taking small actions to show compassion can go a long way, even if it is a bit of an inconvenience. Living with an illness isn't so convenient, after all.

In this story, a lovely Walmart employee provided a great example of how we can better the lives of those around us with her outstanding act of kindness. When a woman suffering from cerebral palsy was denied service at a nail salon, this Walmart employee stepped in and sacrificed so that the woman wouldn't feel dejected. 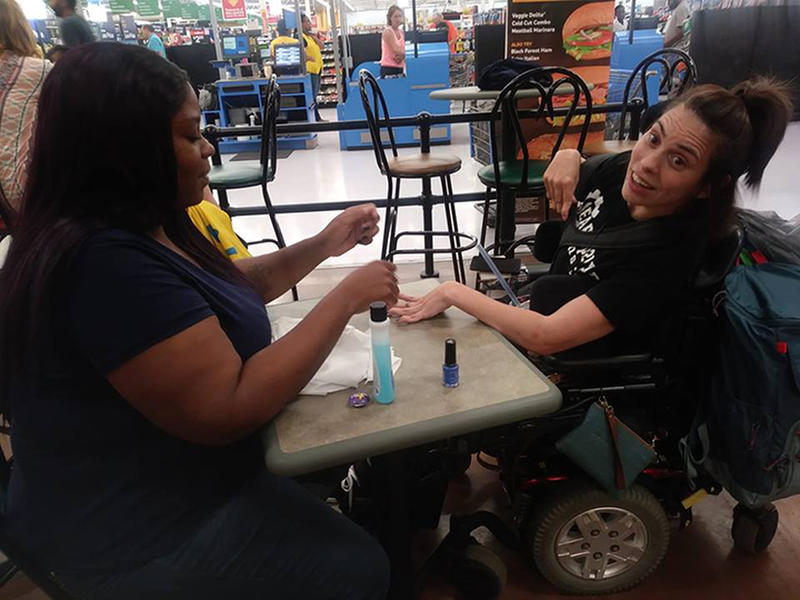 A Woman Suffering from Cerebral Palsy was Denied Service

Two Walmart employees were working one day when they noticed a wrongdoing occur at the store next door. Ebony Harris, who works as a cashier at Walmart, said that the nail salon next door had refused to perform their nail services on the woman due to the fact that her cerebral palsy would cause her hands to constantly shake and wave. To put it simply, they did not want to deal with the "hassle" of having her as a client. 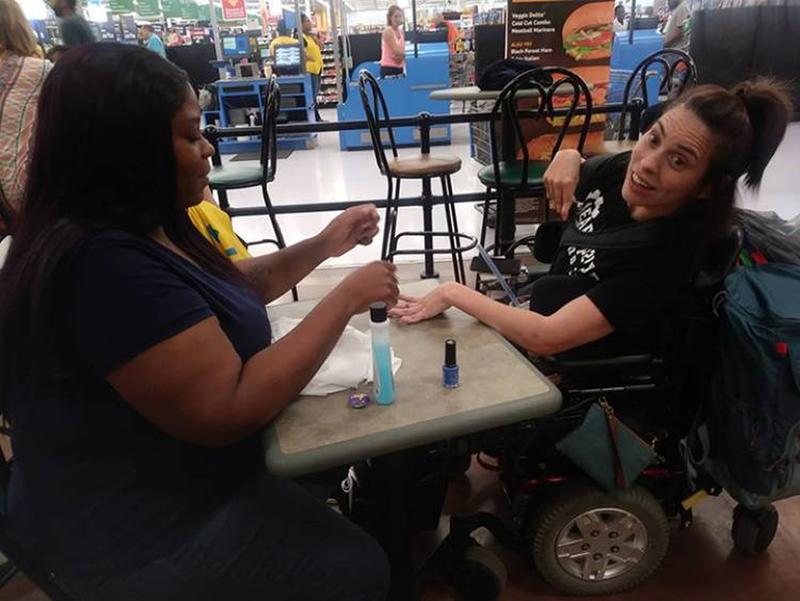 Tasia Smith, an employee at the Walmart Subway noticed the same thing. As she stated via a Facebook post: "Today, this sweet girl went into burton Wal-Mart's nail salon "Da Vi nails" and they denied her service because 'she moves too much." Ebony Harris took matters into her own hands, as you can see in the picture taken above by Tasia Smith.

Ebony Harris Decides to Put Matters in Her Own Hands

Ebony Harris decided that if the nail salon wasn't going to do the woman's nails, she would put it upon herself to do them for her, even if it meant sacrificing her break to do it. That's right, Ebony Harris used her valuable break time to sit down with the woman and do her nails, simply out of the kindness of her own heart. Harris noted, "I just wanted to make her day special. I didn't really want her day to be ruined. That's why I did it." 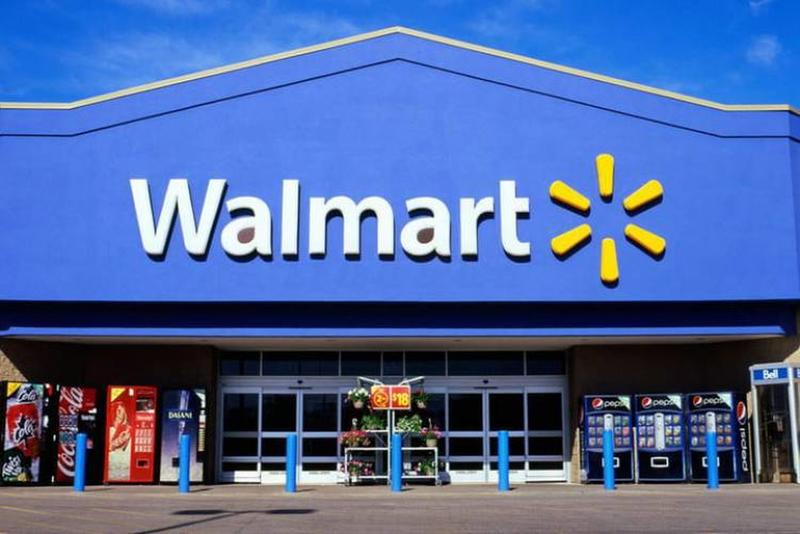 As Smith explained her Facebook post, "Out of the kindness of the walmart workers hearts they went and bought nail polish and came into my work to paint this sweet girls nails. They were so patient with her (which she did great, barely moved & was just so sweet)... Thank you to the walmart workers for making this beautiful girls day!"

Despite the situation, Harris and Smith don't want retaliation against the salon

Careful not to cause an unnecessary stir, Harris noted, "We're not trying to bash the nail salon. We're not trying to make them lose customers, make them look bad. But maybe spread awareness that no matter the person, who they are, what color they are, disability, whatever, they're people too. She's a girly girl. She's just like you, me, Tasia, my daughter, anybody. She wants to look pretty, you know, and so why can't she?" 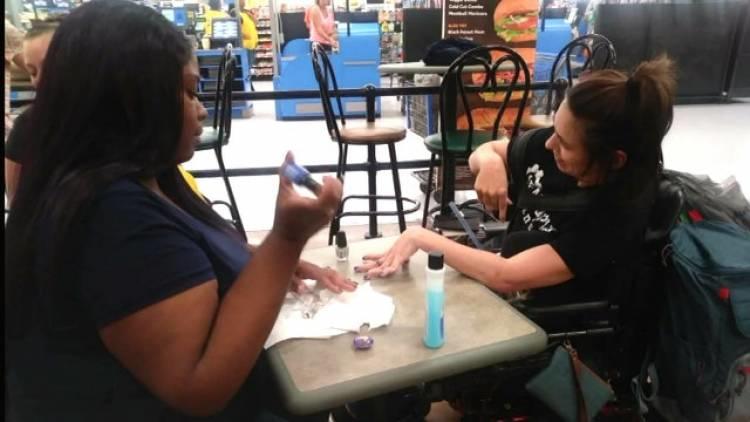 As for Tasia Smith's reasons for posting about the inspiring situation, she just wanted to post it to make sure that Ebony Harris got all the appreciation she deserved. After all was said and done, the woman got her nails done without an issue. Despite the nail salon's worries, the woman's hands only moved a little bit and were not an issue for Ebony Harris.

When we think of inventors, the image that comes to mind is usually that of a frazzled scientist toiling away in a lab, not celebrities pulled from the pages of Us Weekly. However, a number of well-known public figures hold patents for various innovations. Some are related to the work that made them famous, while others are offshoots of hobbies or just a single great idea.

Part of guitar wizard Eddie Van Halen's signature sound was his two-handed tapping technique, but letting all ten fingers fly while simultaneously holding up the guitar's neck could get a bit tricky. Van Halen came up with a novel way to get around this problem, though; he invented a support (top) that could flip out of the back of his axe's body to raise and stabilize the fretboard so he could tap out searing songs like "Eruption." While Van Halen was obviously interested in improving his guitar work, the patent application he filed in 1985 notes that the device would work with any stringed instrument. Want to tap out a scorching mandolin solo? Find someone selling Eddie's device.

It’s probably not surprising that James Cameron—who designed a submersible to take him to the deepest known part of the ocean—will often invent technology to make his films if what he needs doesn’t exist. He holds a number of patents, including US Patent No. 4996938, “apparatus for propelling a user in an underwater environment,” that he and his brother, Michael, created to film The Abyss and patented in 1989. The device is basically an underwater dolly equipped with propellers that makes it easy for a camera operator to maneuver in the water—and allowed Cameron to capture the shots he wanted for the 1989 film, part of which was filmed in an abandoned nuclear reactor.

In 1987 Jamie Lee Curtis designed and patented a disposable diaper that included a waterproof pocket that held baby wipes. She hasn't profited from her idea yet, though, since she refuses to license the patent until diaper companies make biodegradable products.

You know him as a rock legend, but Neil Young also loves trains—so much that he owns a stake in a model train manufacturing company and has an extensive collection. He also holds seven patents related to model trains, including Patent No. US5441223, "Model train controller using electromagnetic field between track and ground."